Inishcorrig on Coliemore Road in Dalkey, Co Dublin, which has its own private harbour, has gone sale agreed after two years on the market.Video from August 2015. Video: Bryan O’Brien / Aerial footage : Matteo Tuniz 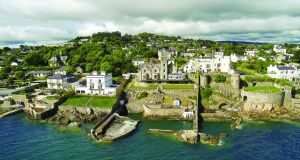 Inishcorrig on Coliemore Road in Dalkey, Co Dublin, which has its own private harbour, has gone sale agreed after two years on the market.

News reaches Around the Block that after two years on the market one of Dalkey’s most striking – and pricey – private homes, Inishcorrig, has sold. The picturesque castellated mansion on Coliemore Road with its own private harbour became Dublin’s latest “most expensive home” when it went on the market in late August 2015 seeking €10.5 million through joint agents Christie’s International and Thom Burke Kennedy.

Two years and a couple of reality checks later, the asking price fell back to €8.5 million, and it looks like the price drop paid off because the property has just gone sale agreed, subject to contracts being signed. Neither agent was forthcoming about the price paid – Simon Ensor of Sherry FitzGerald (agents for Christie’s) couldn’t be reached while Thom Burke Kennedy would say only they were “happy with the price”. However local sources have indicated the final price came in just under €8 million.

The Victorian property dating from 1847 is a local landmark built to a unique and romantic Gothic Revival style and enjoys very fine views across to Howth, Dalkey Island and the Muglins. With the rumour mill in Dalkey and Killiney alive with stories about UFC fighter Conor McGregor currently casting about a for a home in the area, this dramatic statement property looks on paper like the perfect fit. But it seems The Notorious is not the new owner, and in fact didn’t even view the property. The buyers, it turns out, are an Irish family who plan to live there.