In the auction rooms: Bowie masks, hares and stags 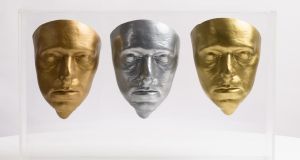 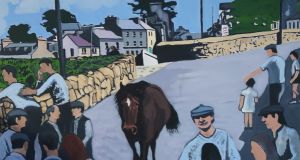 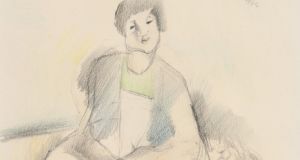 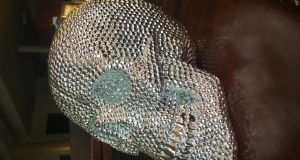 Although the Irish art market appears to be heading towards recovery since the economic crash, it still remains a fickle world. Take, for example, Flower Seller Ann Street Christmas Eve 1944, by Louis le Brocquy. The graphite and coloured pencil drawing sold in March 2007 for €18,000 at Adam’s. It appeared in November 2017 at Whyte’s with an estimate of €6,000-€8,000, but remained unsold. It is now listed in the forthcoming Morgan O’Driscoll catalogue, as lot 11 with a new estimate of €4,000-€6,000. The lower estimate is now in the region of the buyer’s premium paid on top the hammer price in 2007.

An interesting item in O’Driscoll’s online auction, which will end on March 11th, is lot 77: a set of three life cast masks of David Bowie, which are third generation from the originals taken by make-up artist Dick Smith for Bowie’s 1983 film The Hunger, when the singer was 36.

Smith received an Academy Award in 1985 for his work on Amadeus, and in 2011 won the Academy Honorary Award for his life’s work – the only make-up artist to do so.

The masks (€500-€700) were created by life cast aficionado Joe Murray: “They are set in resin rather than plaster cast, two are spray painted in gold and silver, and the third has bronze powder within the resin. Every line and wrinkle from Bowie’s face is still clear.”

There appears to be a theme of nature in the forthcoming sale by Damien Matthews of the contents of Our Lady Queen of Peace Convent in Rathgar on March 6th. The convent, purchased by Orwell Healthcare, is undergoing a complete refurbishment, and the contents of the convent, together with a house on nearby Temple Road, form the lots in the sale.

Also featured are novelty items from the convent – lots 575 and 639: two skulls, one clad in rhinestones and the other, with a hinged jaw, is silver plated (€40-€70 and €50-€80). Memento mori in the form of skulls were reminders of human mortality in the past, and there has been a renewed interest in skulls across Europe, possibly fuelled by Damien Hirst’s For the Love of God. His diamond and platinum skull first came to life in 2007, at the aptly-named Beyond Belief exhibition. Its asking price was £50 million, which led to the keen observation by writer Nick Cohen on the piece that “the price tag is the art”.

The recent theft of a skull and an 800-year-old mummified head from St Michan’s church in Dublin has resulted in the crypts – which have been open to the public since 1930s – now being closed for the foreseeable future.

Continuing the theme of nature are items at Adam’s Blackrock to be auctioned on March 5th. Of equine interest are lot 21, Galloping Stagecoach and Shires by Henry William Standing (€300-€500) and lot 39, Pony Express Roundstone by David McDonagh (€500-€700).

But most interesting, and in a nod to getting lost in nature, is a framed letter from Lennox Robinson to George Bernard Shaw, written from his home at Longford Terrace in 1943. Robinson, a dramatist, poet and theatre producer, was in the process of editing Lady Gregory’s journals in preparation for her biography, and wrote to establish whether it was the playwright or a poet mentioned in her diary.

He wrote to Shaw asking “if it was you or WB [Yeats] who got lost after dinner.” Lady Gregory had noted that either Yeats or Shaw disappeared in the woods at Coole – eventually waking the proprietor of Taffy’s Hotel – who, indignant at being woken, described the lost poet or playwright as “looking for bloody fairies” while a search party “with lanterns, a pony and bell” combed the woods in search of him.

Robinson was invited to China in 1956, by the communist government to give a lecture on Shaw – celebrating the centenary of the dramatist’s birth. The Nobel Prize winner for literature in 1925 visited China in 1933 and was given the name Xiao Bona. Fudan University still holds an annual Shaw essay-writing competition. These historical links are still alive today: the celebrated Taiwanese writer Ying-Tai Chang was the recipient of the 2015 Lennox Robinson literary award.

The typed letter, with some handwritten notes, has an estimate of €300-€400. See morganodriscoll.com, adamsblackrock.com and matthewsauctionrooms.com.