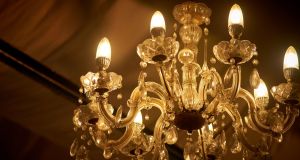 Twinkle, twinkle: the most common type of chandelier is what’s called the Dutch Gothic style, says Don Ryan of Dungannon-based Ryan and Smith.

If you’ve ever been lucky enough to get a look inside Ballyfin, Kilkenny Castle or Áras an Uachtaráin, and glanced up at the chandeliers twinkling above, then chances are they were supplied and/or repaired and cleaned by Bray-based Clancy Chandeliers, run by brothers Ger and Derek Clancy.

Their enduring appeal lies in the fact that they offer a more nuanced form of illumination, one that gives a soft grey hue to the glass instead of the contemporary, take-your-eyes-out bling that you often see in London and in the Middle East, Derek says.

“It’s the amount of lead crystal in the glass that gives these lights their sparkle. It’s the lighting equivalent of a grey diamond – a far more subtle and chic way to wash a room in light,” says Derek Clancy.

A chandelier is any ornate, often branched design that is suspended from a ceiling, says Don Ryan of Dungannon-based Ryan and Smith. He recently sold a collection of retro crystal designs to Homewood, a country house hotel near Bath in the southwest of England.

Chandeliers from the 1840s to 1870s were gas-fitted and subsequently capped and wired for electricity, the smart home technology of its day. The most common type is what’s called the Dutch Gothic style, he says. It has ball and brass arms and candle cups, a style that has been around since the 16th century.

What about antique Waterford crystal? “Eighteenth century ones will sell for more than €50,000,” says Don Ryan.

The Clancys tend to hang their lights at the height they think works with the proportions of the room. “Buyers should know what their ceiling heights are before shopping for a suitable style. To look as elegant as possible a hall light, for example, needs to be tall and narrow,” Ger Clancy explains.

In the interconnecting rooms of, say, a large Dublin redbrick, where ceiling heights are about 12 feet, you need a slightly squatter style because the rooms are often wider than they are high.

The brothers work with numerous decorators including Grainne Nash, Mary Ryder of Curated and Helen Turkington, who says their enduring appeal is their quality.

“They look underdone rather than overdone and work really well with a classic contemporary look,” says Turkington.

She finds it increasingly difficult to get matching pairs to suit interconnecting rooms and has started to bring in French designs from Avignon.

Dealers agree chandeliers are becoming harder to source. Of Clancy Chandeliers current stock, only 10 per cent is antique.

This Connemara coastal home will blow you away
4