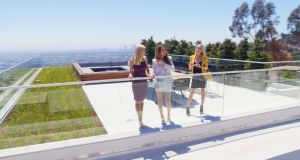 “Find people who are worth at least $250 million and get them up here,” says Jason Oppenheim of the Los Angeles real-estate agency Oppenheim Group. Jason – or it might be Brett, his identical twin, who’s the other half of the business – is standing on the roof of an unfinished house somewhere in LA, addressing his selling team.

The “team” are a posse of tall, impossibly gorgeous women, wearing killer frocks and high heels instead of the high-vis vests you usually see on building sites. They have names like Chrishell and Heather and Maya, but don’t bother remembering any of them, because the only one you really need to know is the uberseller (and uberwagon) Christine.

Selling Sunset is a Netflix series whose second season has just landed (with the third coming in August: it was shot pre-pandemic). The show focuses on high-end residential properties in LA and a group of beautiful people who market them. Sadly, everything was filmed before the arrival of Prince Harry and Meghan Markle; otherwise the Oppenheim Group would almost definitely have been touting for their business.

At a time when we are restricted from travelling anywhere, looking at the houses destined for purchase by only the wealthiest people in the United States’ second-biggest city is even more revoltingly beguiling than usual. The skies are always blue. We don’t see any traffic. We just see extraordinary houses, and some of them are truly beautiful, midcentury masterpieces of taste and minimalism, every piece of furniture a modern classic, every pool a lozenge of shimmering exquisiteness.

Others, like the one that opens the new season, is more of a village than a house. There’s a garage that takes 12 cars. A “home theatre” the size of a public cinema. A “closet” for clothes that resembles the ground floor of Brown Thomas. A rooftop infinity pool, with a giant screen that pops up beside it, which you can watch from sunloungers. It is so far beyond anything resembling a normal house that at one point I wondered if it was a hotel, but nope. It’s a gaff. Just a giant one.

“This house is not for the average person walking down the street,” Heather, or Chrishell, or Maya informs us sternly. “You need to have a lot of money.” I never would have figured. In fact you need to have at least $43 million, which is the asking price of this one. With the agent’s commission of $1.3 million, it’s clear that staggering sums of money are to be made from flogging houses in this part of the world.

Back at Oppenheim HQ, I am momentarily distracted to see that the office chairs used by the identical twins and their crazy, glamorous all-female selling team are the same as we use at The Irish Times. Or, at least, that we used to sit in, back in the days when people worked in offices.

You come to ogle the incredible real estate in the Hollywood Hills and Bel Air, and stay for the drama. Enter Christine, who recently met her retired tech multimillionaire fiance when showing him a house on the Oppenheim books, whom the rest of the team are pretending hard not to be raging jealous of.

The engaged couple have been jetting around the world on his private plane for the two months since they met; the team back in the office have been stalking them on Instagram, mad as hell that Christine didn’t bother personally telling each of them about her retired tech multimillionaire fiance.

Christine is now slumming it by coming back to work to earn an honest crust, although a more cynical viewer might speculate that she is hoping to become even more famous via the reality show. Certainly, when she turns up for work after her extended holiday in a new Lamborghini, she is wearing an engagement rock the size of a small potato. Neither money nor crusts are lacking.

Christine is back to claim her tiara as the agency’s top seller, while once again sitting in her Irish Times office chair. “You know that saying, There are too many cooks in the kitchen?” she says, the moment she returns. “Well, there are too many bitches in this office.” As the title of the new season’s first episode says, “Let the Real Estate Games Begin.”