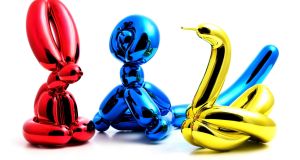 A rare painting by Paul Henry, Celtic Cross in a West of Ireland Landscape (1929), featuring a large cross dominating his signature bulbous cloud landscape has appeared on the market, listed in Morgan O’Driscoll’s online art sale which concludes on April 14th.

The painting, which the label identifies as having been in the collection of Sean T O’Kelly, president of Ireland from 1945 to 1959, was last sold less than three months ago, when it was listed in an auction catalogue in the United States.

Now one of Ireland’s most sought-after artists, it was a poster that turned Henry’s career around in 1925, when the London, Midland and Scottish (LMS) Railway Company reproduced one of his Connemara paintings on a publicity poster. Overnight, Henry, who had also worked as a commercial illustrator, became the poster boy for Irish tourism.

The painting on sale, depicting a Celtic cross and castle, was also used in promotional material by the Irish government, as it appeared as a cover illustration on successive issues of Irish Travel, the official magazine of the Irish tourist board.

“Although the scene is imagined, it is certainly intended to represent the west of Ireland,” according to Peter Murray, former director of the Crawford Art Gallery in Cork, who describes the work as “a quintessential retrospective painting”.

In the same online sale, lot 32 is A Landscape with Figures and the Ruins of Melrose Abbey, Roxburghshire by George Barret, another Irish landscape painter who was one of the highest earning artists of his time. Born in 1732 in Dublin’s Liberties, Barret climbed his way to success in London due to a combination of his ability to create huge landscape paintings and cultivate wealthy patrons.

Within six years of leaving Dublin he made such a name for himself he was included in the selection as one of the founding members of the Royal Academy, and his specialisation in landscapes made him popular among landowners who wanted to see their estates captured on canvas.

His income in the mid- to late-1700s was £2,000 a year, but due to his disastrous handling of his business affairs, when he died in 1784 he left his wife and children bankrupt.

The highest price achieved for one of Barret’s works was in 1994 when The Dukes of Cumberland and York driving a Landau was sold through Sotheby’s in New York for £154,362.

The painting now featured in Morgan O’Driscoll’s sale, of which historian William Laffan suggests: “It would seem that Barret was particularly pleased with this work as, most unusually, he signed it”, is listed with an estimate of €60,000-€90,000.

Also included along with artists such as Gerard Dillon, Sir Frederick William Burton and Louis le Brocquy (lot 52, a watercolour and crayon diptych of William Butler Yeats, €15,000-€25,000) is a work by Evie Hone, The Crucifixion, inspired by a stone carving in the oldest building in Kinsale, St Multose Church (lot 15, €3,000-€5,000).

Modern works include three porcelain sculptures, each from a limited edition of 999 by American artist, Jeff Koons. The three porcelain chrome-painted sculptures of Balloon Rabbit, Balloon Monkey and Balloon Swan, come in their original boxes with silver-plated signatures, and each piece is listed with a €15,000-€20,000 estimate.

O’Driscoll uses software where potential buyers stuck at home can view artworks listed in the catalogue, and see them true to size hanging on their own walls. “We are delighted to have developed the virtual technology that is now enabling us to adapt and continue to bring key pieces of art to the Irish market in the coming weeks and months,” he said. morganodriscoll.com