Ex-RUC man turned art dealer George McClelland and is wife Maura built up a vast art collection, the last of which is being sold 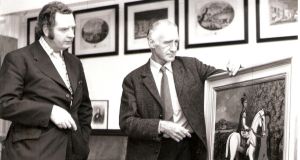 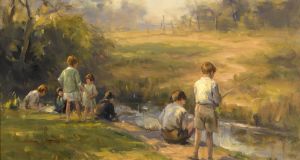 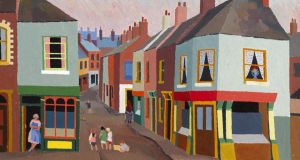 Children at Play by Colin Middleton showing the streets of his native city before the Belfast Blitz (€30,000-€50,000)

One of the best-known private collections of modern Irish art is The McClelland Collection, assembled by the late George and Maura McClelland. They acquired hundreds of paintings and sculptures by leading Irish artists during the last four decades of the 20th century.

According to Whyte’s auctioneers, which is selling part of the collection at an auction in the RDS, Dublin, later this month, “The husband and wife gallerists and collectors made their mark on the art scene from the mid 1960s when they opened the McClelland Galleries in Belfast exhibiting a wide range of contemporary Irish as well as international art.

“The pair were both agents and friends to their artists and provided opportunity and support particularly to Irish talent.”

But who were the McClellands and why is their collection being sold?

George McClelland was born in Donegal in 1931 and grew up in Omagh, Co Tyrone.

Auctioneer Ian Whyte said McClelland “left school at 14 – as he had dyslexia which was not catered for in the schools of the 1940s and was “self-taught”.

He later passed the required exams and joined the RUC (Royal Ulster Constabulary).

He married Maura (née Scannell of Anascaul, Co Kerry) and the couple settled in Belfast. But, said Mr Whyte, “he left the RUC in 1966 as he was in danger as a Catholic in the force” and “intended emigrating to Australia”.

When the couple sold the contents of their house (George had been collecting antiques) they were “pleasantly surprised at the profit on his collecting and set up an antiques shop in Belfast instead of emigrating.

His shop was bombed and he opened an art gallery in Lisburn Road but, because of death threats from the IRA who discovered his service in the RUC, he moved his family to Dublin – in 1975 – where he established himself as a leading art dealer from his large home in Taney, Dundrum.” In Dublin, he pursued a lifelong ambition and went to the National College of Art and subsequently exhibited his own work in several of the Irish Living Art Exhibitions.

George and Maura retired to the Isle of Man in 1986, but remained regular visitors to Ireland.

The couple loaned hundreds of paintings to the Irish Museum of Modern Art which were exhibited there between 1998 and 2004.

In 2003, the McClellands sold hundreds of paintings to the Dublin solicitor and property developer Noel Smyth in a private transaction which stipulated that170 of the artworks were to be donated to Irish Museum of Modern Art under Section 1003 of the Taxes Consolidation Act (1997).

The tax provision meant that Mr Smyth received a credit against his tax liability to the value of the works donated.

Thus, according to Whyte’s, “IMMA received a great collection of modern Irish art at no cost.”

There was, of course, a cost to the State in taxes foregone. The financial details were not made public. Whyte’s said Mr Smyth had “subsequently sold most” of the balance of the McClelland paintings – believed to be more than 200 – at various auctions.

So there are plenty of McClelland collection paintings in circulation and they occasionally turn up at auction.

But the McClellands had held on to hundreds of paintings and sculptures which, according to Whyte’s, they “treasured most and retained for their private collection”.

Whyte’s said, “The estate of George and Maura McClelland has now asked the company to sell in excess of 350 works in a series of auctions in 2016 and 2017.

The total estimated value is up to € 1.5 million and the first tranche is being offered in the September 26th auction.

The top lot is Lot 50, FE McWilliam’s sculpture Matriarch, 1935 estimated at €100,000-€150,000 and described as “a unique piece in cherrywood sculpted at a time when McWilliam was heavily influenced by his friend Henry Moore”.

There is a big selection of pieces by Tony O’Malley “spanning three decades” with estimates ranging from €1,000 to €50,000 among the 19 works offered.

Lot 27, Children at Play “a rare oil from 1939 by Belfast artist Colin Middleton shows the streets of his native city at a time before the Belfast Blitz and a period of personal loss which led to the destruction of much of his output from this period”(€30,000-€50,000).

In addition to the McClelland Collection lots, Whyte’s is also offering a further 102 lots including paintings by Jack B Yeats, Paul Henry and Walter Osborne.

Viewing takes place at the RDS – from Saturday to Monday, September 24th-26th from 10am to 6pm daily – where the auction takes place on Monday (September 26th) at 6pm.

What are your funeral options if you don’t believe in God?
7