Edward Hopper’s ‘Chop Suey’ on the market for $70m 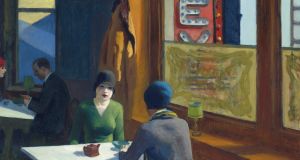 It’s a simple scene: just two women chatting in a restaurant. But as depicted by the great American painter Edward Hopper in his 1929 work Chop Suey, it becomes a breathtaking work of art. The painting is to be sold at Christie’s in New York in November, with a pre-sale estimate “in the region of $70 million (about €60 million)”.

Regarded as the most important Hopper canvas left in private hands, it uses a complex interplay of shafts of light and colour to capture the atmosphere of the chop suey restaurant. These inexpensive eating-places were hugely popular in New York in the 1920s, though as usual with Hopper, the table doesn’t feature any food. The presence of a tiny teapot suggests the meal is already over.

The painting had an especially personal meaning for Hopper, according to a 2007 review in the Smithsonian Magazine: “The scene and the place derive from a Columbus Circle Chinese restaurant where they (Hopper and his wife, the artist Josephine Verstille Nivison) often ate during their courtship.”

Chop Suey is one of the masterpieces from the Barney A Ebsworth collection of more than 85 artworks which illustrate the rise of American art across the 20th-century. Ebsworth, an entrepreneur who founded Clipper Cruise Line and invested in the Build-A-Bear stuffed toy company, developed a passion for art when he was stationed in France as a US soldier in 1956, during which time he made weekly trips to the Louvre. Ebsworth’s credo in collecting was “quality, quality, quality”. With that in mind, he amassed a comprehensive collection of American Modernism, and many of his works were loaned to leading institutions throughout his years of ownership.

Other highlights from the collection include Jackson Pollock’s Composition with Red Strokes and Willem de Kooning’s Woman as Landscape, along with paintings by Joan Mitchell, Jasper Johns and Georgia O’Keeffe. The artworks are currently on display in Paris, and will be in London from September 28th to October 5th. See christies.com

Let’s go outside: The why, how and where of getting outdoors, whatever the weather
5