Dig in: the joy of green manure in the garden 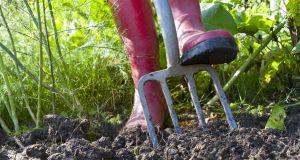 It’s fair to say that the thing that probably preoccupies us the most when we first start to garden is colour. In our mind’s eye dance tantalising images of lofty delphiniums in shades of periwinkle and sapphire blue, perfumed roses in hues of peach, plum and apricot, stately lupins with giant flower spires the colour of rubies, and jewel-coloured hollyhocks as tall as ourselves. Or, if we’re more of a kitchen gardener, then it’s flavour. Perfect, blemish-free delicious potatoes, tomatoes that taste like the nectar of the gods and raspberries as sweet and succulent as could be.

Sometimes – just sometimes – as beginner gardeners we succeed in making these seductive dreams a reality. But more often than not we fail. And being inquisitive, driven, curious, competitive, intelligent human beings, we then ask ourselves why we failed, at which point begins every good gardener’s obsession with good soil . . . because good soil is what it’s all about. Indubitably. No question.

Green manures, for the uninitiated, are nothing like conventional farmyard manures

Crumbly soil the colour of chocolate that holds moisture (but not too much), that’s full to bursting point with humus, earthworms and beneficial micro-organisms, that supports healthy, vigorous growth. Show a non-gardener a handful of such soil and they’re likely to wrinkle their nose up in baffled disgust while wondering to themselves why you’re proffering them a handful of dirt.

But show it to a seasoned gardener and you might as well have offered them a fistful of crack cocaine. Their eyes will light up, they’ll sniff it, squeeze it, roll it admiringly between their fingers and thumb, and then ask you fervently, beseechingly, passionately where you got it from or how on earth you made it. All of which leads me to the joys of green manures.

Green manures, for the uninitiated, are nothing like conventional farmyard manures. The latter are dark, heavy, costly to buy in large quantities, messy, labour-intensive to spread, and very rich in both organic matter and plant nutrients that are a natural byproduct of the excrement/urine of certain animals (cattle, horses, deer, chickens, pigs).

Instead, green manures are plant crops – or “cover crops” as they are sometimes known – that are direct-sown and grown expressly for the purpose of digging them back into the soil to improve its structure, boost beneficial soil microbe activity, add organic matter and replenish lost nutrients.

While they are still growing in the ground, they also help to protect the soil surface from damage caused by weather extremes as well as to smother weed growth and attract beneficial insects into your garden or allotment. Now is an excellent time to sow them into recently cleared vegetable beds/ cut-flower patches/ the polytunnel/ glasshouse for overwintering in your garden/ allotment with a view to digging them into the ground later this autumn or next spring.

But first a few words of advice. There are lots of different kinds of green manures, some annual, some perennial, some (known as leguminous plants) with root systems capable of extracting nitrogen from the soil, others with dense fibrous roots that help to improve soil structure/drainage, some suited to mild gardens with free-draining soils and others to cool, heavy clays. So it’s important to pick those that are most suited to your garden or allotment’s growing conditions.

At this time of year you can sow field beans, winter vetches/ tares, forage rye, crimson clover, buckwheat, phacelia and caliente mustard, some of which are also available as special seed mixes. Field beans are hardy, leguminous plants especially suitable for using as an overwintering green manure on heavy clay soils, where their root systems will help to improve its heavy, cloddy structure.

Sow the seed between now and early November but avoid sowing into very free-draining/ dry soils as this is a green manure that needs plenty of moisture to flourish. So does the leguminous winter tares, a hardy annual vetch that does best in a heavier, slightly alkaline soil.

Forage rye (a grassy green manure also known as Hungarian grazing rye) is another hardy annual green manure. It does well in pretty much all kinds of soils including heavy clays, although it’s important to dig it in very well in early spring and allow the foliage plenty of time to break down (about a month), as it contains a chemical that inhibits the germination of seeds of certain plants, especially spinach, carrots, parsnips.

If yours is a free-draining loam or even sandy soil, then a good choice for this time of year is crimson clover, another perennial, leguminous, nitrogen-fixing, fast-growing member of the pea family. Not always winter-hardy in very cold areas, it’s best suited to milder, coastal gardens. Also well-suited to more free-draining soils is the fast-growing half-hardy annual green manure known as buckwheat and the hardy annual phacelia, with the added advantage that as neither are members of one of the main vegetable/food crops, they won’t affect crop rotation plans in your kitchen garden or allotment.

As a member of the brassica family, caliente mustard will have an impact on crop rotation (because brassicas are one of the main crop rotations in a kitchen garden), but this fast-growing green manure, which should be sown in late September/ early October for overwintering, has a special trick up its sleeve. It’s prized for having what are known as “biofumigant properties”, meaning that when its fresh foliage is chopped up using a strimmers, lawnmower or garden shears and then very quickly dug in (15-20cm deep is sufficient), it releases a natural, beneficial chemical (called isothiocyanate or ITC) that becomes trapped in the soil where it helps to suppress a range of common soil-borne pests and diseases.

In fact, strimming/mowing is a great way of quickly chopping up the foliage of any of the green manures that I’ve mentioned. They can then be either dug in to the ground or (some but not all kinds) can be left as a green mulch on the surface of the soil where they will quickly rot down/ be pulled into the soil by hungry earthworms. To sow them, prepare the ground as you would for any other crop by clearing it of weeds, gently treading it and raking it to a smooth and even tilth. Then evenly broadcast the seed to the recommended rate and gently water it in. Recommended seed suppliers include most good Irish garden centres as well as quickcrop.ie and fruithillfarm.com (which offers organic seed).

September marks the beginning of autumn proper as dwindling light levels and lowering night-time temperatures start to slow down growth in the garden or allotment. It’s also the time of year when opportunistic fungal and bacterial diseases and plant pests can easily become established in the polytunnel or glasshouse unless you’re careful. So to help plants growing under cover to stay as vigorous and productive for as long as possible, reduce watering, make a point of regularly removing any diseased or discoloured foliage as well as any annual plants that are obviously past their best and keep your polytunnel/ glasshouse well ventilated during the day but close the doors on cool nights.

While apples are ripening on the trees at this time of year, it can sometimes be hard to know when they are fully ripe and ready to eat. A simple test is to hold the fruit gently in your hand and twist it. If it’s properly ripe, it will easily come off the branch but if not, you need to leave it to ripen a little further, bearing in mind that you may also need to protect the ripening fruit against birds, wasps and other insects. Remember that not all apples will ripen at the same time (some are early season, others much later) as well as the fact that not all apples are suitable for storage. Generally the early ripening varieties such as “Katy” and “Discovery” should be eaten within a matter of weeks while the later-ripening kinds such as “Ellstar” and “Jonagold” can be stored for several months (sometimes this even improves their flavour) in a cool, dry, dark shed/ box.

It may seem terribly early to start talking of ordering spring-flowering bulbs for planting this autumn but in fact now is an excellent time to start placing orders while stock of hard-to-get or in-demand varieties are still high. Recommended online suppliers include Dublin-based mrmiddleton.com, Cork-based fruithillfarm.com (for organically produced bulbs), peternyssen.com and avonbulbs.co.uk. Most good Irish garden centres will also be getting in a wide stock of spring-flowering bulbs over the coming weeks. When selecting bulbs, always go for plump, unblemished, large bulbs as these will produce the best results.

Sunday, September 2nd (from 2pm): Patthana Garden, Kiltegan, Co Wicklow, “The Secrets of the Smaller Garden”, a free talk by owner and garden creator TJ Maher on getting the very best out of a small garden, with plant sales also, call 086-1944547 for details. Patthana Garden is open to visitors on the same date (and on every Sunday until October 1st) from 12-6pm.

Is this the beginning of the end? Who knows, but general practice is open
10