Portraits of 13 taoisigh, a cheque given by Patrick Pearse to Clerys in Dublin and fittings from various Dublin nightclubs will be among 3,500 items to be sold in an auction organised by Dublin antiques dealer Niall Mullen. Video: Bryan O'Brien 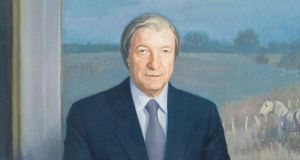 A unique series of portraits of all 13 former taoisigh has unexpectedly come to light, and will be sold at auction next week. But the identity of the mystery artist is likely to surprise the Irish art world.

The oil paintings depict all of Ireland’s government leaders before Leo Varadkar, from the first, WT Cosgrave, to the most recent, Enda Kenny. They are signed “J.W” – which, the auctioneer said, were the initials for Johnny Wilson. But The Irish Times has learnt that Johnny Wilson is a persona created by the paintings’ Chinese artist.

The portraits were commissioned by a Dublin businessman, Peter Dwan, who has revealed that the artist was a young man named Zhang Yi, who “came to Ireland to study English and art in around 2006”. After the two men were introduced to one another, Mr Dwan, whose interests include a Spar convenience store in Ranelagh in Dublin, decided to give the artist “a helping hand, as he was over here from a foreign country”, and commissioned paintings from him.

Mr Zhang worked in “a very basic studio in Rathmines” and adopted the pseudonym Johnny Wilson because “it was easier for him”. Mr Dwan “thought it was a great idea to get paintings of all the taoisigh by one artist”, and he provided Mr Zhang with photographs of each politician and explanations of their role and significance in Irish life.

Mr Dwan said he was selling the portraits because his house wasn’t big enough to hang them in. Although he is “not political”, his favourite was that of Mr Haughey, which showed “great presence”; he described the portrait of Lynch as very calming. Mr Dwan, who said he had met or knew many of the former taoisigh, believed the paintings displayed the artist’s “great talent for capturing the soul” of each man.

The organiser of the auction, Niall Mullen, who judges the annual antique-restoration project for RTÉ’s The Late Late Show, said he was “taken aback and intrigued” to hear of the real identity of the artist. He said the paintings would be auctioned as a single lot with an estimate of €30,00-40,000. They will go on public view on Friday, March 2nd, at the Heritage hotel in Killenard, near Portarlington, Co Laois; the two-day auction starts there on Monday, March 5th.

According to Mr Dwan, Zhang Yi returned to China four years ago but is available, for a price to be negotiated, to paint a similar portrait of Mr Varadkar, to complete the series, if the buyer is interested.

How to make a raspberry shortcake
Real news has value SUBSCRIBE