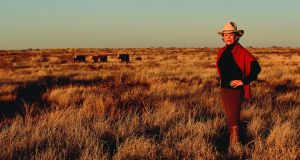 The private collection of the late American philanthropist and art collector Anne Marion will be unveiled at Sotheby’s in New York, ahead of a number of sales in May. Her collection, anchored by post-war American art, is estimated in the region of $150 million (€125m).

She was the fourth generation of the Texan Burnett ranching dynasty, whose distinctive red and white barn was used as the backdrop for Marlboro cigarette advertising in the 1960s and 1970s. She died of lung cancer in February 2020.

The family owned more than a third of a million acres at their 6666 ranch, one of the largest in the Lone Star State.

Her great grandfather, Samuel Burk Burnett took the unusual step of willing the bulk of his estate to his 22-year-old granddaughter Anne (Anne Marion’s mother). He had his wife Mary committed to a psychiatric hospital – she was mumbling that he was planning to kill her. However, on the day he died she escaped from the private mental facility, and subsequently succeeded in taking a case challenging her husband’s $60 million (€49.6m) will. She donated the bulk of this estate to establish the Mary Couts Burnett Library at the Texas Christian University.

From an early age Marion was surrounded by art. Her mother commissioned acclaimed architect IM Pei to construct a family home – one of only three and the largest of Pei’s residential designs. Pei, who designed the glass pyramid for the Louvre in Paris, later won the Pritzker prize for his work designing museums throughout the world.

Over the course of her life, Marion donated many works to museums, and oversaw, through her charitable foundation, the distribution of more than $600 million (€496m) worth of grants to a variety of institutions and causes.

She was a driving force behind the expansion of the Modern Art Museum of Fort Worth and the Kimbell Art Museum as well as being a former trustee of the Museum of Modern Art in New York. Along with her fourth husband, John L Marion, a former chairman at Sotheby’s North America, she established the Georgia O’Keeffe Museum in Santa Fe in 1997. O’Keeffe – whose father was of Irish descent – is considered to be the mother of American modernism.

At the heart of this private collection are masterworks by three of the greatest American artists of the post-war period, executed at the apex of their respective careers: Andy Warhol’s Elvis 2 Times, Richard Diebenkorn’s Ocean Park No 40; and Clyfford Still’s PH-125 (1948-No 1). Each of the three works is expected to achieve in excess of $20 million (€16.5m).

Many of the works are from artists of the abstract expressionism genre – the movement founded in New York in the 1940s – who Marion would have known through her artistic circles and museum patronage. sothebys.com

Made You Look - Netflix

Not all art buyers are fortunate with their investments, as the Barry Avrich documentary, Made You Look, on Netflix outlines. It tells the story of the most successful forgery scam in the high-end art world.

In 2011, the Knoedler Gallery in New York – one of the oldest in the US – closed its doors amid lawsuits and fraud, after 165 years in business.

The gallery’s president Ann Freedman – critics are divided over whether she was a fall guy or complicit – began a series of purchases between 1994 and 2011. It transpired that the paintings – purported to be by artists including Mark Rothko, Robert Motherwell and Jackson Pollock – were forgeries painted in a garage in Queens by master forger Pei-Shen Qian.

They were brought to the gallery by Glafira Rosales who offered them at fire sale prices, saying their private owner wasn’t too bothered about money – a red flag in any business.

Although the works passed muster from respected authenticators, things were a little murkier when it came to the important question of provenance. By 2012, the FBI was investigating at least 12 paintings – the final number was 60 – which had been sold by the gallery for over $80 million (€66m).

Even Domenico De Sole, founder of Tom Ford International and chairman of Sotheby’s, was duped when he and his wife purchased what they thought was a Rothko for $8.3 million (€6.8m). They sued the gallery and Freidman for $25 million (€20.7m) six years after the painting hung in their home behind expensive glass rigged to an alarm system. The case was settled out of court ending a four-year battle.

In the aftermath of the biggest art fraud in US history, Rosales, who sold the forgeries, served three months in jail, and was ordered to pay $81 million (€67m) in restitution to the victims. She now works as a waitress in a diner in Queens. Ann Freedman continues to plead her innocence and operates an art gallery in New York. Michael Hammer, who owned the Knoedler Gallery, and who would have received the most money from the sales moved to the Cayman Islands while his wife Dru, established a Christian ministry. The forger, Pei-Shen Qian, fled home to China, where his wife says “he’s now just painting for himself”.