All the wonders of the world in a cabinet of curiosities 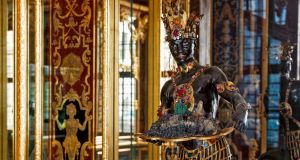 Cabinets of curiosities, wonder rooms, or Wunderkammer, were collections of extraordinary objects that, like today’s museums, attempted to categorise and tell stories about the wonders and oddities of the natural world.

They captured the imaginations of people in the 16th and 17th centuries, as they were a combination of witches’ caverns, apothecary chambers and science laboratories.

The term 'cabinet' originally described a room rather than a piece of furniture and displays could include crocodiles, corals, instruments and curios. They offered a glimpse into a world full of wonders and treasures that aimed to reflect the order of the universe.

The trilingual tome takes the reader on a visual journey through time, from the Renaissance and Age of Discovery periods to the present day, in an undertaking that took several decades through seven European countries.

The result is a set of wonderful photographs by Massimo Listri, with detailed commentary on each of the 19 museum chambers visited, highlighting the most remarkable items in each collection, while indicating how these timeless treasures defined civilisation, and the modern concept of a museum.

Ranging in size from a small piece of furniture with multiple drawers to entire rooms, these cabinets helped define the personalities of the well-heeled over the ages, through possessions as tangible tokens of erudition, wealth and taste. At the time no self-respecting naturalist, prince or wealthy merchant was without their own cabinet of curiosity.

The book depicts collections of cowrie shells, magic coral and a wax bust of King Frederick III, and also explores a series of hourglasses collected over three centuries, in addition to the Coburg Ivories. These delicate 17-century art objects by German carver Marcus Heiden, were confiscated from the German town of Coburg as spoils of the Thirty Years War, and found their way to the Florentine treasure collection of the grand dukes of Tuscany, now known as the Museo degli Argenti in Florence.

In the 16th and 17th centuries, science and magic stood side by side, and the combination of these two world views helped shape the nature of these collections of exoticism and variety.

But these cavernous assemblages were not always built on truth, and often contained fantastical fabrications closer to art than natural evidence.

It was not uncommon to find dried dragon blood alongside other magical creatures that were at the time thought to have supernatural powers.

In the days when mermaids were thought to exist, collections often held so called evidence of these fabled creatures. They were actually made by stitching a monkey torso to the tail of a fish, and what were displayed as unicorn horns were in fact the tusks of narwhals.

By the late 18th century, the cabinet of curiosity went out of fashion to be replaced by the modern museum, with magic and fantasy replaced by reason and science, and where objects were organised by genus and species rather than a haphazard mishmash of wonder.

The art market can be traced back to the origin of collecting in these cabinets of curiosities from the Renaissance period, and the book depicts the wonders from museum vaults all over Europe, including treasures of the Green Vault in Dresden. In a heist last year, treasures with an estimated value of €1 billion were stolen from this collection, housed in eight ornate rooms in the Residenzschloss – a former royal palace in the German city.

The Hunt Museum in Limerick is a great Irish example of a modern wonder room. It features more than 2,000 artefacts acquired by John and Gertrude Hunt over their lifetimes and reflects their interests and personal curiosity, rather than pieces collected for commercial reasons.

In Ireland, opening doors can be very hard
5

Dublin hotels offering discounts of up to 50%
7