Historic lodge with guesthouse comfort at Spanish Point for €595k 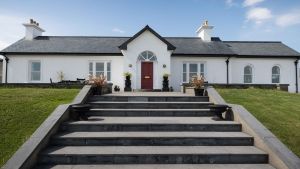 Spanish Point takes its name from a fleet of vessels – which were part of the Spanish Armada – lost in stormy seas along the rugged coastline in 1588.

It is estimated that 6,000 Spanish sailors lost their lives along the western seaboard while trying to invade England under the command of Philip II of Spain.

While today it is a popular tourist spot at the edge of the Wild Atlantic Way in Co Clare, Spanish Point’s location as a tourist destination dates back well over two centuries.

For a time, the Atlantic Hotel, which was built in 1810 by local landlord Thomas Moroney, boasted the title of biggest hotel in the British Isles. The property, which had beds for 70 guests and stabling for 60 horses, was popular with the Irish and British gentry until 1930, when it shut down as British travellers did not venture to the region after the Irish War of Independence and the Civil War.

By the early 1800s more than 204 country lodges and villas were built to accommodate visitors along this stretch of coastline from Milltown Malbay to Spanish Point.

One such was Greenlawn, a period home dating from 1837, which was taken over by the British Admiralty as a base for the coastguard. It became the residence of Lieutenant George Shuckburgh and ever since has been known as Admiralty Lodge.

The property was run as a 12-bedroom guesthouse and restaurant until 2008, when owners Pat and Aoife O’Malley decided to make it their family home. They converted the separate block of bedrooms into five apartments, which they sold as private holiday homes.

The O’Malleys are still involved in tourism, operating Spanish Point House, a former manor house from 1830, which was run by the Sisters of Charity before the couple purchased and renovated it in 2015. It now operates as a luxury guesthouse, albeit currently closed due to Covid-19.

Now they are placing their period home on the market as they plan to build another house, which is closer to their son Rian’s school and friends, on a site belonging to Pat’s family. “It was a difficult decision to make, as we really love this house, but planning permission was so hard to achieve [on the new site] and it is due to lapse, so it was really a case of now or never,” says Aoife.

While the period house is listed as having only three bedrooms, it occupies a generous 414sq m (4,456sq ft) of living space. The fact that the three bedrooms are very spacious means some could be divided into more sleeping accommodation, or indeed the second living room could also work as an additional bedroom.

In terms of privacy from the now privately owned apartments, they have a separate entrance and the rear garden of Admiralty Lodge is walled in to offer complete separation between the house and the holiday apartments.

The couple have decided to sell their home themselves: “We couldn’t get an agent during lockdown, and as we sold three of the holiday apartments ourselves, we felt we were up for it. We can arrange viewings at any time that suits potential buyers, and have all the information about the history and locality.”

The property is in turn-key condition and most period features are intact, including old marble fireplaces and particularly interesting ceiling work in the main bedroom.

Admiralty Lodge is seeking €595,000 and can be viewed by appointment through the couple’s business email, info@spanishpointhouse.ie.