Ponden Hall, a nine-bed B&B, has made itself an attraction for the novel’s superfans 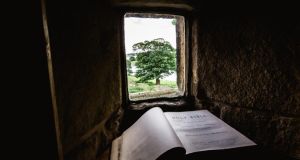 Ponden Hall: the B&B re-creates details from Wuthering Heights, right down to the Brontës’ family Bible

A slice of literary history is for sale in West Yorkshire, in England. Ponden Hall, a property that in part dates back to 1541 and is said to be the inspiration for Thrushcross Grange, in Emily Brontë’s novel Wuthering Heights, is currently an upscale bed and breakfast.

The nine-bedroom grade-II listed property, on the Pennine Way walking route about 5km from the Brontës’ home, a parsonage in the picturesque village of Haworth, is owned by Julie Akhurst, a former editor of Women’s Weekly who swapped the London circuit for the moors with her husband, Steve Brown.

After buying the house, in 1998, they upgraded to conservation standards, rewired and installing new plumbing and underfloor heating throughout the ground floor. The 464sq m (5,000 sq ft) property features oak beams in vaulted ceilings.

Three of its bedrooms are offered as B&B accommodation where superfans can immerse themselves in the novel’s storyline. In the Earnshaw Room, for example, a box bed is built around the “Cathy window”, where Catherine Earnshaw’s ghost struggled to get in, desperately searching for her lover, Heathcliff. The details match the novel, right down to a re-creation of the family Bible in which Cathy wrote her name.

An upgrade in 1801 added a grand entrance and the installation of what the sisters called “the finest library in the West Riding”, as this third of Yorkshire, England’s biggest county, was known at the time. The library was considered the largest private book repository in the region in the 19th century.

The property is seeking £1.25 million, or just under €1.5 million, through Fine & Country.

Reimagined redbrick in Terenure for €925k