Cork likely to overtake Dublin in house price growth in 2015 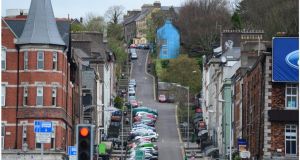 Patrick’s Hill in Cork: house price growth in the city has been gathering pace since the middle of last year. Photograph: Bryan O’Brien

The residential property market in Cork is likely to overtake the Dublin market this year. House price growth in Cork has been gathering pace since the middle of last year, and while Dublin outperformed the rebel county by just 0.1 per cent in 2014, Cork is set to record growth in property values ahead of the capital in 2015.

A shortage of residential properties for sale, and an absence of new homes building have been major contributors to upward pressure on prices in Cork. The quantity of properties to buy has declined seriously in the past 12 months, in particular since July 2014, when price inflation began to gather pace.

The latest property price register data indicates that the quantity of property available for sale in Cork city and county is down 37 per cent on stock in July 2014, while stock in the city alone is down 20 per cent since July 2014.

According to Marian Finnegan, chief economist with estate agents Sherry FitzGerald: “This points to a period of inflated price growth and would suggest that growth levels in Cork could exceed those of Dublin in 2015. I would anticipate Cork will expand by between 10 and 12 per cent in 2015.”

There is consensus among industry observers that value growth figures for Dublin are more likely to be between 5 and 10 per cent, compared with 18 per cent last year.

Price increases have already started to slow in Dublin, while Cork has significantly lagged the capital’s recovery and this is only now being reflected in rapid price inflation. (Dublin grew in capital value terms by 14.1 per cent in 2013 where Cork grew by only 2.1 per cent in the same period.)

Trevor McCarthy of Irish and European estate agents in Cork and the rural professional group of the Society of Chartered Surveyors Ireland (SCSI), anticipates the issue will be addressed when new homes schemes begin to be built from the middle of this year onwards.

“The latest price increases have made new homes building economically viable again in Cork, and we will see more development as sites re-open and come on stream in the next six to 12 months. The supply issue has to be addressed in order to make the price growth we have seen so far sustainable.”

McCarthy has seen a dramatic increase in mortgage lending valuations, while cash buyers have become less prevalent, two trends that point to a more normalised market.