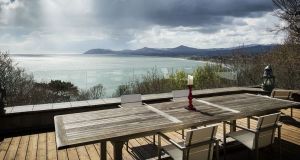 UFC fighter Conor McGregor has taken up residence on Killiney Hill, and where more appropriate than in a fast lane pad formerly owned by Formula One driver Eddie Irvine and located close to rock star, Bono, on Vico Road.

But it seems The Notorious is just dipping his toes in the sunny southside waters, as he only plans a three month rental of the ultra-modern six-bed property overlooking Killiney Bay, within a 10 minute walk from Dalkey village.

The news follows weeks of speculation that the double-weight UFC champion had purchased a home in Dublin’s most exclusive suburb after he was spotted in bars and restaurants around Dalkey village, even taking to the waters in his freshly minted yacht and jetski.

Ardan, where McGregor, his partner Dee Devlin, and new baby Conor Jr will spend their summer, is a luxury villa of 4,500 sq ft that was sold by Irvine for a sum of around €6 million in 2008.

Accessed through dense greenery up a winding lane off Vico Road, and backing onto Dalkey Park, the property only recently came on the market for short term rental, seeking an overnight rate of €768 per night on accommodation websites. It has now been block booked for the months of June, July and August.

The property can sleep 11 people, with five double bedrooms and one single, and magnificent views across Killiney Bay. It’s estimated the three month sojourn will set McGregor back around €70,000, or €23,000 a month.

It had been speculated that the controversial fighter, who will earn around €30 million this year, was about to buy the neighbouring and (also) notorious Gorse Hill, which was formerly owned by solicitor Brian O’Donnell, and is currently for sale for €8.5million. So far it is understood McGregor hasn’t even viewed the extensive coastal property.

The McGregors have quit Kildare for Killiney, where they had been living in Ladycastle, a Celtic Tiger development on the grounds of the exclusive K Club near Straffan. The rental property of around 3,000 sq ft was owned by Bosco French, son and business partner of Arthur French, the developers behind the Ladycastle scheme.

It’s likely McGregor will make good use of the additional space at the new Killiney digs having gained something of a reputation at the K Club for his party lifestyle, and he could well be ready to put down roots in an area close to his manager and the bright lights of the city.

There are more than a few serious trophy homes currently on the market in Killiney, and it’s likely estate agents there will be burnishing their glossy brochures at the prospect of a lucrative sale to the champion fighter.