Burst pipes? How to deal with domestic disasters after The Beast 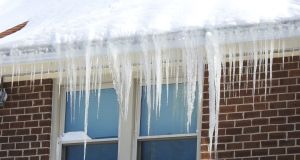 Instead of enjoying the snow, you might be one of the unlucky ones, however, who woke up to a home-related headache

So. You’ve woken up to the aftermath of the Beast From The East. If you’re lucky, you’re looking out at snow-capped rooftops, chocolate-box vistas and children dashing through the snow with wild abandon.

You might be one of the unlucky ones, however, who woke up to a home-related headache. “In the last 48 hours, the system has experienced more than four times the usual number of queries,” observes Ted Laverty, chief executive of OnlineTradesmen.ie.

“What we’re seeing a lot of is burst and frozen pipes, and disrupted water supply to the home. There are loads of call-outs for emergency plumbers and electricians. Often, it’s people looking to get pipes unfrozen, or if there’s a burst, to get it repaired. When water freezes, it expands. Unfortunately the pipes used for plumbing in your home are often not flexible. For this reason a freeze can often cause them to burst, with water escaping into your home. The ensuing damage can be extensive, with many home owners having to pay thousands of euro to clean up after such an event.

“Electricians are being called by people looking to disconnect something or, where water damage has occurred, to rewire.”

Alas, a lot of things can go wrong in the aftermath of a big weather event like storm Emma. Here’s what to do if you’ve discovered a domestic disaster.

What to do if… the water’s not working

“In all likelihood, it’s a frozen pipe,” says Laverty. “The first thing you need to do is take the pressure or water out of your system so that water doesn’t escape into your house. If you can climb under your kitchen sink or wherever the water to your home is, you’ll find the main stopcock (or valve), usually a red tap or lever, so turn that off. If you have a water tank in the attic you’ll need to turn the water supply from that off. Turn off the heating system and then turn on your taps to drain the system - this will enable you to minimise any potential water damage from a burst pipe.

Snow Heroes: Tell us about the people who saved you from the storm

“We advise people to get plumbers, but there’s a lot of pressure on the supply of plumbers right now, so what we advise people is to perhaps identify the source of the blockage,” adds Laverty.

“If there’s cold water running, it means that the mains water is okay. Turn up the temperature in your house by a couple of degrees and the freeze within the structure will thaw out that way. Inspect as much of the piping as you can.

“If the cold water isn’t working, it’s likely the freeze is outside the house. It will be hard to unfreeze something below ground level. You can probably access the water meter but not the pipes around it, and you’ll definitely need to call on a plumber from that perspective. And call your insurance company if your house is insured.”

What to do if… the boiler is making funny noises

“Very often someone might wake up and the boiler won’t go on, or a gurgling noise comes form it and it will fail,” observes Laverty. “Most likely if it’s a condensing boiler – and a lot of the boilers in the last five or six years will be condensing boilers - the pipe that runs outside the house to drip condensation into a drain is frozen. What you need to do is find that pipe (outside) and thaw it with a hairdryer or heat lamp. Once it’s thawed, restart the boiler.”

What to do if… there’s a problem on the roof, or with the drains

“The big thing we’re seeing is roof damage, where you have high volumes of snow on a structure and the structure is not up to it,” says Laverty. “People have bought these lovely elaborate roofs with overhanging parts and multiple levels, and they accumulate a lot of snow that can cause a lot of problems.

“Thaw water will naturally flow into a properties ground drains to escape. Where these drains covers are blocked with debris, leaves or frozen the water will be diverted and settle within the property. This can ground based flooding in a property if left untreated,” says Laverty.

Guttering is very vulnerable in storms because of a build-up of ice, which can create a weakness in the structure. If your guttering falls or bursts, it because the ice has created a weakness somewhere. “You’re quite limited in what you can do, especially if you don’t have the requisite experience,” advises Laverty. “They key thing is to let it thaw. When the time for a thaw arises, be sure to get the snow shovel out and create a space around the house so that when water does start flowing, it won’t flow straight towards the house.”

Similarly, approach a situation where roof tiles have loosened or fallen with caution. “We don’t advise anyone to get up and crawl around on a roof, and the best thing to do is to store loose tiles safely and find a roofer at a later time.”

What to do if… your electricity is down

Sadly, the likelihood is that some 26,000 people woke up without electricity due to a fault in the grid or supplier. “There’s not much to do except notify the ESB in case they don’t know about it,” says Laverty. “There’s nothing we can advocate except staying warm and perhaps checking your fuse board to see if any switches might have tripped.”

What to do if … your windows letting in freezing cold wind

“There are things you can buy in your local hardware store, like adhesive window sealant,” explains Laverty. “A good way of assessing whether you are losing heat via the window is to hold a lighter or candle close to the window. If it flickers or blows out, you have a leakage problem. Perhaps take it as a lesson that you’ve gotten away with single glazing for long enough.”

What to do if… your dog still needs walking

Remember that salt is great for easing traffic, but hell for dogs; rock salt in particular can be jagged and can damage a dog’s soft paws. Chemical de-icers – particularly those containing the antifreeze material known as ethylene glycol – pose, is perhaps, the biggest threat: Not only will a dog hold up its paws in pain and temporarily limp away, but the ingredients can also prove harmful should a dog accidentally ingest them. “It can be really bad for their kidneys, or other organs,” says Erin Wilson, a veterinarian and the former medical director of the ASPCA Adoption Center in Manhattan. “That’s why it’s really important, if your dog isn’t wearing booties, to wipe their feet, belly and undercarriage off thoroughly with a towel when you come home from a walk.”

Greta Thunberg is going back to school. What has she achieved in two years?
6