From roofing, to half-doors and kitchen dressers, here are 10 ways to get it right 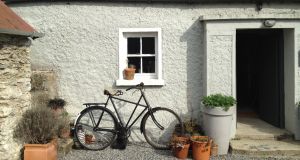 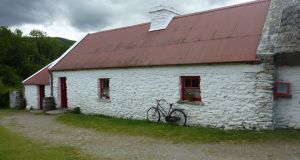 Galvanised roofing was often laid atop the traditional thatch 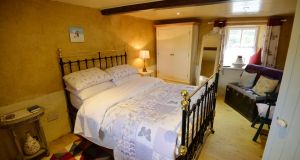 Brass bed and patchwork quilt from a traditional Irish cottage 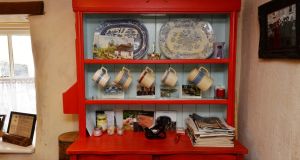 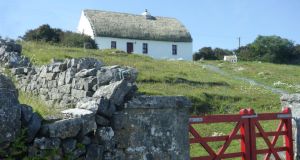 Cottage on Inishmore, Aran Islands. All thatch is golden when it is first applied and it darkens over time. Photograph: Education Images/UIG via Getty Images 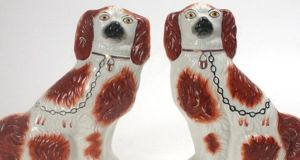 Many of us have dreamed of happening on a beautiful bothan of a traditional cottage, buying it for a song and escaping the rat race to renovate it and live happily ever after, spending our days writing the next great Irish novel while feeding the chickens and ducks and living a self-sufficient life from the market garden.

It is the stuff of a John Hinde postcard but if you’re really set on living the dream here are 10 ways to create the authentic Irish cottage look.

A lot of galvanised roofing was laid atop the traditional thatch, says architect Michael Kelly, and many eventually upgraded from tin to slate. Kelly has used Tegral on several of his farmhouse projects. It has corrugated metal sheeting called Fineline, which is higher than farm building quality, and available in Goosewing and Merlin grey as well as Olive Green. The barnyard red of old is no longer stocked as standard but can be sourced to order, says Séamus Whelan, Tegral’s technical adviser.

Straight sheeting can be curved in the factory to order to create a rounded barn-roof effect (from €25 a metre). For a rusted rustic effect, so often seen on derelict buildings, Kelly suggests Corten, a pre-rusted steel.

All thatch is a gorgeous golden colour when it is first applied. It goes grey over time and even darker if near a road due to pollution from cars, says Kyran O’Grady of Wicklow Thatching Services who has been climbing up onto roofs for more than 35 years.

“Historically, straw was used on the east coast and much of the midlands; in Limerick, Clare and some of the midlands they used reed; in the north and some parts of Donegal they used flax, rye straw or bent grass.”

How do you know if a thatcher is any good? View work that is at least 10 or 12 years old, says O’Grady.

Traditional white- or lime-washing of exterior walls and farm buildings was a natural way of dealing with disease, given the fact that residents lived in such close proximity to livestock, says colour specialist Orla Kelly who advises Irish paint company Colourtrend.

She says you need protective clothing and gloves and eye guards to work with traditional lime flakes which, when mixed with water, create the whitewash we all love. “To get a brilliant white they mixed some Reckitt’s Blue into the wash. A little red oxide created that lovely soft blush pink that worked so well with the surrounding green fields.” Some would add yellow ochre, she says.

A breathable material, the downside to its application is that it needs to be reapplied every year, something that was compulsory under law in the 1950s to minimise contamination. The upside to those annual refreshes was that the colour would build up, creating lovely soft curves on cottage exteriors. Kelly has emulated this in her own Co Kilkenny cottage.

Paint is a more practical option, she says, and suggests Colourtrend’s Elfin for the blue-white; Cuckoo Call for the pink; Fleur Jolie as shades that will give you that 100-years old look in a couple of coats.

A traditional half-door is really a door and a half – a full door that opens inwards and a half door set to the front of the frame that opens outwards. It was designed to keep the birds in the yard – hens, ducks, geese, turkeys – from entering the house, explains Nicholas Taylor of Heritage Sash & Joinery in Drumfin, Co Sligo. This practical and simple solution to farmyard life has been romanced in generations of colour-saturated postcards. Known as the Tipperary door, says Taylor, it costs about €1,500.

A more contemporary version is a door split horizontally with a lip on each half that includes draught-proofing although on bad nights the driving rain of the West of Ireland still manages to seep through, he counsels. This costs about €1,000.

When I heard about the flagstone floor in my great aunt’s house in Portnoo, Co Donegal, I imagined a floor covered in the national flags of different countries and wondered how you kept them in position when you moved furniture around.

Often made of York stone, the slabs were a move up in the world from the plain cob or earth floor of old. Original flagstones are difficult to source. Mac’s Warehouse sells a reproduction option from €25 a square yard.

Liscannor stone, a grey or black sandstone with marine worm fossils, was typically used in Co Clare. Quarried in layers rather than blocks, it was used in flooring, roof tiles and outside cottages, says Alan Flaherty, who is the third generation of his family to quarry the stone.

It can be seen in King John’s Castle in Limerick and in the reception area of Dromoland Castle and formed a big part of the 1970s and 1980s cottage revival. In its natural state it is a very dark grey but can be varnished or finished with a sealant to make it easier to clean and will look black. It costs from €50 a square yard.

Anyone who has ever warmed their backside on their granny’s range cooker knows how good a working range can feel. The multi-tasking workhorse can heat the house, all water, boil a kettle and roast a memorable-tasting chicken all at once. Many companies sell traditional-style ranges; Lacanche, Brittania and Smeg all offer fresh takes on this country kitchen classic but to really channel authenticity you should opt for a reconditioned Aga, Rayburn or Stanley. Go for oil rather than solid fuel as the vintage models can smoke a lot. Tipperary-based H&F Cookers sell ranges on plinths or with legs. Prices start from about €1,650 for a vintage Stanley 8.

There was a time when every home in Ireland had wrought iron or brass beds but because they were in everyday use very few came to market in good condition. “They’re no longer in fashion so there’s no major demand for them,” says Philip Maguire of Connaught Antiques. “You will see the odd one at a house contents auction and some have been painted white but most shoppers buy reproduction versions these days. They don’t tend to buy old beds of any description.”

Done Deal has a queen-size bed for €160 from a seller in Co Wexford and Ikea’s Kopardal, at €125, has a black bedhead in the cottage style. This can be painted to suit any colour scheme once you invest in a metal base coat.

A traditional Irish chain-pattern quilt, with a lattice-pattern, will dress a brass bed beautifully. If you want to do it yourself buy the supplies at Sew Needlecraft Dublin in Rathmines. You can expect to pay upwards of €200 for supplies and spend at least 40 hours making it, says the shop’s owner Eilish Murphy.

The less crafty might prefer to commission a quilt from the Limerick Quilt Centre. Expect to pay upwards of €450 for a double. The shop also runs classes at €15 for two and a half hours and day-long workshops for €60.

In days gone by these dogs often sat in the front windows of a cottage. They also lived above the hearth. On the coasts, the story goes , when men went off to sea their wives would turn the dogs’ heads from facing out to facing in, to give their lovers a signal that their husbands had gone, explains Francis Street-based antique dealer and story-teller, Michael Connell. “When the hubbies returned the dogs were turned to be outward facing again. It’s a good story and is one I’ve heard again and again so there must be a grain of truth in it.” He’s selling a pair for €150.

Fadó, fadó, most cottages wouldn’t have had much by way of a kitchen, as we know it, bar a basin and hearth where a cast-iron skillet would have hung, says Swinford-based architect Mark Stephens, who has renovated a number of cottages.

The kitchen table was where everything happened: where visitors sat and drank endless cups of tea, where brown bread was made and, in the evenings, when travelling musicians used to call the table was pushed against the wall to make room for a spot of dancing, around the floor and “mind the dresser” was the catch-call.

The pine dresser would have displayed the good china, along with all the paraphernalia of life from letters to kitchen utensils, from bills to twine.

Sadly, much of the nation’s original farmhouse furniture was exported to antique dealers in the States by canny Dublin dealers in the 1980s so originals are hard to come by. Furniture maker Christy Bird does a roaring trade in traditional style pine and painted furniture. It sells a variety of scrubbed and waxed pine kitchen tables and has painted-leg and cutlery drawer options. Prices for a six-seater size start from about €600.

Dublin auction houses such as Buckleys of Sandycove and Herman & Wilkinson in Rathmines often have pine tables and dressers, although most will be reproductions.

Folklore states that the spirits of the house – former residents – live on in the hearth so architect Mark Stephens counsels against knocking this integral feature.

Tongue-and-groove panelling on the ceiling and framed doors with a diagonal brace that emulate traditional barnyard doors are simple interior ideas that architect Michael Kelly has used on one of his projects, a barn-inspired building in Co Wexford.

Lifting the lockdown: A new way of buying and selling houses
6