‘Bleak’ Limerick landscape gets a lift with co-living Georgian makeover 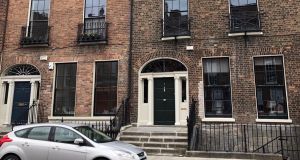 You would never imagine that Limerick has the largest Georgian period urban area in Ireland, apart from Dublin, on reading the current tourism development strategy for the city and county, prepared by Future Analytics, with its throwaway line about engaging with the Irish Georgian Society’s local branch to provide “a platform to showcase this hidden gem”.

If anything, Newtown Pery – a grand grid plan commissioned by landowner Edmund Sexton Pery in 1769 and developed in succeeding decades – is the potentially glorious elephant in the room, if only Limerick City and County Council would acknowledge its existence and take serious steps to reverse decades of official neglect, casual abuse and rampant decay.

Much of the area is still festooned with electricity lines and poles, and not nearly enough of its building stock has been added to the Record of Protected Structures – timber sash windows have often been replaced by PVC and unsympathetic development proposals involving the demolition of 18th or 19th century buildings continue to be entertained by the city’s planners.

But there are some positive signs that this bleak picture is changing. One of the grand Georgian houses on O’Connell Street has been beautifully restored (with wigged-and-tucked pointing) by conservation architects Sheehan and Barry for Ingenium, a management training and consultancy company headed by James Ring, former chief executive of Limerick Civic Trust.

Up on The Crescent, the city’s most notable Georgian set piece, work is being completed by John Moran, former secretary general of the Department of Finance, on a funky “co-living” scheme where residents will each have their own room (some with ladders leading to mezzanine sleeping quarters), while sharing kitchen and dining facilities on the hall floor level.

Moran believes the concept is “ideally suitable” for Georgian houses, making them available to young people as interesting places to live compared with sharing a house in the suburbs

Although there are doubts about the viability of “co-living” schemes due to the Covid-19 pandemic, Moran believes the concept is “ideally suitable” for Georgian houses, making them available to young people as interesting places to live compared with sharing a house in the suburbs. And, of course, this house on The Crescent is fully wired up for modern living.

Limerick-born Moran, who now chairs the Land Development Agency, also bought the house next door for conversion into apartments, with one flat per floor, and also owns another Georgian house on Pery Square, which he intends to refurbish as a grand private residence. He believes in Georgian Limerick, and is putting his money where his mouth is, as it were.

After the University of Limerick set up its school of architecture in 2005, its first head, Chicago-born Merritt Bucholz, bought a small Georgian house on Lower Hartstonge Street and renovated it with one room per floor – kitchen in the basement, living room on the hall floor, bathroom above and bedroom on the top. It was a showcase for what could be done in Newtown Pery.

Indeed, many of its mid-sized period houses could be restored as single family homes, preserving their original features while installing all of the comforts of modern living. That’s what the Living City Initiative, introduced in 2015, aimed to encourage by providing tax incentives to both owner-occupiers and landlords, but the uptake in Limerick has been disappointing so far.

Even though the initiative, pioneered by former minister for finance Michael Noonan, also applies to designated areas in Dublin, Cork, Galway, Kilkenny and Waterford, the number of applications to avail of it has been so minimal – a total of 13 in 2015; 15 in 2016; and 20 in 2017 – that it needs to be revisited to establish why it hasn’t worked in levering regeneration.

The Fianna Fáil-Fine Gael-Green Party programme for government, Our Shared Future, pledged to “introduce a new scheme to expand and build on the Living Cities Initiative to encourage infill development”. The first priority, however, should be to encourage people to restore and renovate historic buildings, injecting new life into neglected areas like Newtown Pery.