At home with Gutter Bookshop’s Bob Johnston: ‘We love antiques and bargains’ 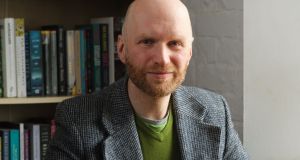 Brighton born Bob Johnston has lived in Dublin for almost 20 years. In 2009 he set up The Gutter Bookshop in Temple Bar, followed by a second branch in Dalkey in 2013. He has won many awards for his contribution to bookselling, most notably Independent Bookshop of the Year (UK and Ireland) at the British Book Awards 2017.

Bob lives in a workman’s cottage in Malahide with his husband Leon McAleenan, an artist and teacher from Warrenpoint, Co Down. Their home is filled with curiosities and charity shop finds. Also in residence are Sasha the dog and Molly the cat.

Cheap! Only joking. Shabby chic, I suppose would be the term for it. We both like colour, but we have to be careful, because the lounge walls are lime plaster, so we needed special lime paint to go on it. It gives a lovely washed effect. There’s a cast iron stove, which belts out heat in the winter.

When we travel, we always end up at the flea markets and get things you can fit in your luggage. We got our door handles when we went on our honeymoon to New York last May. We’ve got some antique pine furniture, which came from a lady who was clearing out her cottage in Santry.

My shop in Temple Bar is next to a shop called Find, so we always end up pottering around in there. Across the way, April & The Bear have lovely things. We got our bathroom mirror from the Oxfam shop by Parnell Street, and there’s a branch in Francis Street that does furniture. We also have a couple of really nice Avoca Foxford throws that somebody got us for a wedding present.

We love antiques, we love bargains. We love vintage, charity and junk shop stuff. We think the dining table came off Done Deal for €20. I always dreamed of having a dark green bathroom. Eventually the tiling will get done, but at the moment we have one of those big claw foot baths – I love a bath!

I’m supposed to have this rule with books – ‘one in, one out.’ I have clear-outs twice a year, but I just keep smuggling more in! I love giving books away to people. One of the big reasons I love physical books, is that you can put a book into someone’s hand – pass the love. Hopefully Leon at some stage will have a proper art studio outside of the house, at which point I’ll be able to fill a whole wall in the study with bookcases.

What room do you most enjoy?

I love my bedroom – I could spend all day in bed. Ever since we moved in we’ve wanted a cast iron antique bed, and then Leon spotted this one as he was walking down Capel Street, from a guy who was closing up. I work from home quite a bit, at a desk in the corner of the bedroom. I’ve got my ‘to be read’ pile by the side of the bed, but there’s always a second pile underneath the bed!

Leon goes out and walks Sasha while I sit in bed, drink tea, read books with Molly and chill. Sasha is from ASH Animal Rescue down in Wicklow. We adopted Sasha at 16 weeks old and she has the best life of any dog ever! Our house backs onto the Malahide Castle grounds – we’ve seen Gorillaz and Radiohead there. You go to a concert and you’re back in the house for a cup of tea five minutes later! We have pre-gig BBQs and then we head to the castle and watch a concert.

Which items do you love the most?

Leon’s pictures, mainly because of what they represent in terms of following a creative path. There’s our wedding rings, which are obviously very special to us. We both campaigned very hard for the marriage equality referendum and to be able to get married after 15 years together was amazing. It was such a fantastic day, to get all our friends and family in one place. The rings were designed for us by Barry Doyle, who is in George’s Street Arcade. He recently designed rings for Leon’s sister and her husband. He does beautiful, beautiful work. My wedding ring is yellow gold with a white gold band and Leon’s is white gold with a yellow gold band.

I still have books from when I was a child, stories Mum used to read when I was five, so for 40 years I’ve had an object. It’s a big deal for me, to have something for that long. One of my favourite books is Little Richard by Patricia M Scarry. This was our favourite bedtime story when we were tiny kids, along with Winnie the Pooh and Watership Down.

Which artists do you admire?

Leon has been talking a lot recently about a woman called Rebecca Salter, who he adores. When we were in New York she had an exhibition on, which was stunning. We saw the Lucian Freud exhibition at IMMA last year, which was amazing. There are a few Irish artists that we love, including David Quinn, Helen G Blake, Joanna Kidney and Michael Canning.

I’m not a fan of big open-plan spaces and minimalism. It can work for other people, but it doesn’t excite me in any way. I love having stuff around me. It makes me feel happy and cosy.

We have a week’s holiday in Ireland and each year, we try and go somewhere different. We take Sasha with us – she loves travelling. We rent a cottage that we can drive to, and so wherever we are, we tend to wander around and pick some bits up. I normally do a little search for junk yards and reclamation yards before we go anywhere, and we can stop off and have a nose.

We’re going to Kinvara this year, which is on the Galway-Clare border, near the Burren. We always seem to rent old cottages, which are just as cold and impractical as our own. We’re both a bit funny because I’m vegan and Leon’s gluten-intolerant, so it’s difficult to stay in hotels. We went to New York for the first time last year and just adored it. We spent nine days there and rented an apartment in Brooklyn. Leon loved all the galleries and museums. I loved wandering around and just watching people.

We booked an architect as part of the Simon Community Open Door. It’s a weekend that happens every year, where architects give an hour of their time and you pay a donation to the charity. We need a kitchen that we can fit a table into, so the plan is to knock down the small 1970s extension that we have and build a slightly bigger one, as we love the garden. Leon trained in horticulture as well as art. He’s very into the gardening and I’m very good at killing things.

It will probably mean re-wiring the whole house because as with old houses, you go to do a small job and it just escalates into a nightmare. I just know the minute we look at the kitchen, the electrics and the drains will all need re-doing! If I had €100,000, I would knock down our existing kitchen and build a new one which is green and insulated and design-led, because although I love the old bit of the cottage, we would have a very contemporary extension. We dream of a proper kitchen.