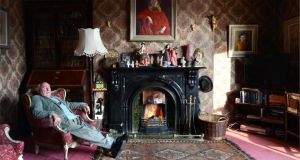 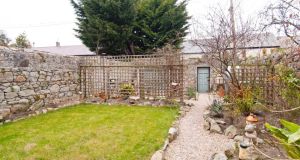 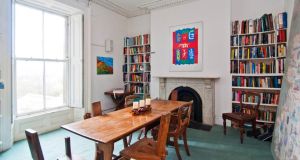 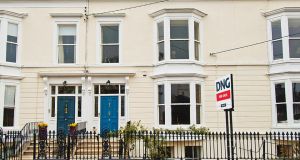 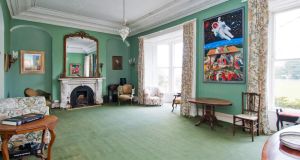 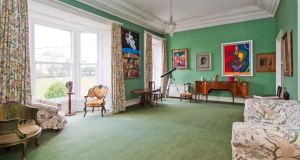 Why should it matter who lived in a house before you? If memories and atmospheres are as easy to clear out as carpets, curtains and light fittings, then the answer is: not at all. But sometimes a sense of a house’s history lingers on, and that is true at 11 Belgrave Square in Monkstown. A large black labrador stands on the doorstep, wagging his tail in the vestibule as spring sunshine filters through glass that came from the studio of the famous Harry Clarke.

The dog’s name is Flann, appropriately enough, as the current owners are artist Micheál Ó Nualláin and his wife Ann, brother and sister-in-law to Brian O’Nolan, aka Myles na gCopaleen, aka Flann O’Brien, one of Irish literature’s most creative geniuses. Before that the house was owned by the family of the painter Maria Simonds-Gooding. Ó Nualláin remembers them as a “formidable crew of aunts, who lived here in faded grandeur holding soirees. They had a white piano in the green sitting room on the first floor. . .” It’s not difficult to imagine talk of Yeats, the Abbey and Lady Gregory whispering into the walls.

There’s still a theatrical sense to the house, from the decorative flair that comes from an artist’s eye, to Ó Nualláin’s own portraits of greats including Micheál Macliammóir, Siobhán McKenna and Tom Murphy, all of whom came to Ó Nualláin’s studio to pose. Belgrave Square itself is one of those quiet, elegant squares, and directly across from No 11 is Cultúrlann, with its Irish music and dancing, and a bar to and from which Ó Nualláin claims to have worn his own path. Decades ago, before he ever dreamed of owning a house on the square, he had a studio at the top of one of the opposite houses. “I’m often surprised I don’t look across and see myself looking out,” he says.

We’re talking in the ground floor living room, beside a gently crackling log fire. It’s one of those elegantly comfortable rooms, where you feel special, but don’t feel you have to sit bolt upright. Ó Nualláin has a brilliant mind, alive to the ridiculous, with a twinkle of humour in his eye. We talk about the writers and artists who have come to the house, as Flann stretches out and sighs. It’s a soothing room. The rich red wallpaper is original William Morris, and the fireplace has beautiful green arts and crafts tiles within its marble surround. High bay windows look across the square, and I think of the aunts sitting here, noting passers by and planning their next party.

Now the house is for sale for €1.7 million through DNG. There are six bedrooms in all, one currently serves as Ó Nualláin’s studio, an exciting place full of canvases and paint. There is a cosy family kitchen, with a sunroom at the back, looking over an enclosed garden. The basement has been designed as a semi-separate apartment for grown up children, and has its own kitchen and bathroom. It’s hard to picture the house without the Ó Nualláins’ wonderful artworks, objects and other creative touches, but I’m convinced that when they have set up home elsewhere, some of that artistic spirit will linger on in No 11.