Around the block: Sale of Garda Club signals end of an era 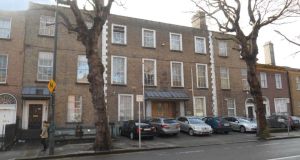 The Garda Club in Harrington Street, Dublin, has been losing about €10,000 a month for the past two years

The forthcoming sale of the Garda Club on Dublin’s Harrington Street will trigger happy memories for hundreds of gardaí who first met their true loves there over the past half century.

The club has no fewer than two ballrooms – not to mention a members’ bar – which were regularly packed on Mondays and Thursdays during the peak years of the 1970s and 1980s.

At that time most of the unmarried members of the force lived in garda stations such as Harcourt Terrace and Pearse Street. The balance of the support for the club came from what was known as “flatland” – inner city flats rented by teachers, civil servants and firemen “up from the country”.

The club has been in decline since the 1990s, partly because a great many of the young gardaí could not afford to buy houses in the city, opting instead to live and socialise in outlying towns such as Mullingar, Drogheda, Dundalk and Naas.

The opening of several new clubs on Harcourt Street – at least one of them owned by a former garda – also provided stiff competition for the Harrington Street venue which has been losing about €10,000 a month for the past two years.

The closure of the club on its 50th anniversary is “unfortunate and sad”, according to one official, who recalled that former garda commissioner Ned Garvey mortgaged his own €50,000 house in 1964 to fund its opening.

Garvey, who set up the infamous “Heavy Gang,” was relieved of his duties a number of years later by the incoming Fianna Fáil government. Odd that the famous club is closing just as another Garda Commission announces his “retirement”.

Can I eat, drink, hug? How to visit a person’s house safely from June 8th
3

How an exercise programme facilitated the spread of coronavirus
4

Irish abroad: Are you worried about when you can visit home again?
9