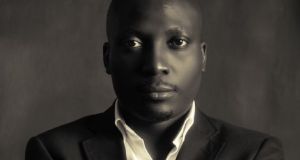 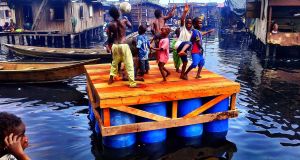 Local children on their way to Adayemi’s floating school 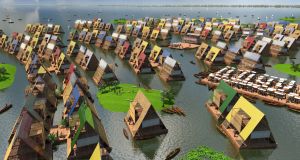 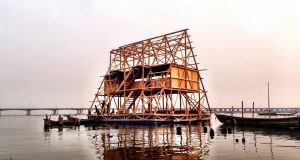 The floating school in Lagos, Nigeria 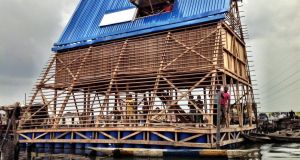 The floating school in Lagos, Nigeria

When architect Kunlé Adeyemi designed a floating school in Lagos, Nigeria – which captured global attention – it was a sort of homecoming for him. He began life near water, nearly 800km north of Lagos in Kaduna, which means crocodile in the Hausa language, as the river running through his home city was indeed dotted with lounging reptiles.

The practice Adeyemi runs in Amsterdam and Lagos, NLÉ, is deeply invested in water and climate change, with Makoko Floating School a part of its research project on African Water Cities.

The talent for designing in tropical climates was absorbed in childhood, from his architect father Fola, “who was very much part of the Modernist movement. He had one of the first indigenous practices in northern Nigeria and had an interest in tropical architecture,” says Adeyemi, who was in Dublin recently to speak at the NewNowNext series of talks sponsored by Arup in partnership with the Irish Architecture Foundation.

“So subconsciously I grew up with sustainability. Growing up in the tropics where it is really hot and wet in the summer and cool and dry in winter makes you more conscious of working with the environment” and harnessing it, he adds, citing light, air (including cross-ventilation), materials, space and shading.

“I was born an architect,” says Adeyemi, whose family home was a permanent construction site. On trips home from boarding school he was always interested and “somewhat anxious” about what he would find when he got there. “It might be an extension, or a fish pond, or landscaping. It was always a good surprise,” he smiles.

When he was studying architecture at the University of Lagos, pioneering Dutch architect Rem Koolhaas, then at OMA (The Office for Metropolitan Architecture) and professor of architecture at Harvard, visited and said he would like one of the students to work for him. He had previous form in this, having taught Zaha Hadid, who later worked with him at OMA. ‘Incredible opportunity’ Many applied and Adeyemi got the gig. He moved to Rotterdam and was sent across the world to work on projects such as the Shenzhen Stock Exchange tower in China, Rothschild finance offices in London, the Qatar National Library in Doha and Prada Transformer in Seoul, liaising with Miuccia Prada and Qatari royalty along the way. Quite a leap, he says, from the more “humble” background he came from. “This incredible opportunity gave me a certain sensibility for a new type of architecture that addresses social issues and the environment.”

“Rem was an interesting man and he definitely brings out the best in people,” says Adeyemi, pausing, laughing and saying “and sometimes maybe the worst.

“I had a really great opportunity to be inspired and be with someone who enabled you to think beyond your boundaries.” Such as? “Relentlessness in terms of creating something beautiful. Nothing is perfect; you can always make things better. When you think you’ve done something truly amazing, you can put in additional effort and push it further.”

Five years ago, he made the leap and set up his own practice (nleworks.com). “It was time for me to grow and take new challenges. I felt it was time to concentrate on a part of the world that needed my input the most,” he said, one of those challenges was the “global south”. And, with his innate knowledge of life in that part of the world, and his pushing of boundaries, he saw opportunities in the things people feared.

The floating-school project was in a community that lived on the water and whose future was at risk from developers razing their world and erecting high-rise buildings.

“The project managed to look beyond design and aesthetic in a carefully thought-out design that addresses urbanisation, environment, the social and political. I learned from the community and improved what they had: using local knowledge and global experience.

“Part of the incredible public interest in the project has helped influence government thinking – about the community which at one stage they were preparing to demolish as they were confronted with a pressure to build. With this intervention, we began a dialogue and gave space for the government and community to interface. This is a possible solution that does not destroy authenticity of community and improves heritage. It can be a valuable landmark destination for the city of Lagos. It is part of a new urbanism and a prototype we are looking to expand: to be applied to other cities.”

He is now working on a hilltop school in Tanzania, balancing the need to protect wildlife and nature while also protecting the children, yet giving them adequate exposure to the environment in order to appreciate it. “I was inspired by the way the Masai live in clusters, in enclosures, to create the masterplan,” says Adeyemi, who is just back from lecturing in the US and has a pavilion building on site in Chicago. ‘Embrace living by water’ Dublin, Cork, Belfast, Galway – along with many other towns in Ireland and across the globe – demonstrate how cities generally grow up by water. With increased urbanisation and climate change causing flooding and threatening land, the issue of addressing water is hot. “We think about fighting it,” says Adeyemi, “but we can work with it and embrace living by water: building on water, across water . . . This addresses the two most important challenges and opportunities humanity has today: urbanisation and climate change. Architecture now should be about innovation, pushing boundaries and excellence.”

That can be an uphill battle for architects. “Yes, but innovation always overcomes resistance. We have to innovate constantly: look at conditions and find solutions. If we don’t push boundaries and overcome resistance there won’t be a lot of advancement: in technology and culture. Disruptive moments and actions pave the way for new.”

It’s hard work for architects to be perfectionists and stretch boundaries.

Meet the Bearman of Buncrana: ‘I knew about Joe Exotic for years’
9