Heated cycle paths and car-free streets: is this bicycle nirvana? 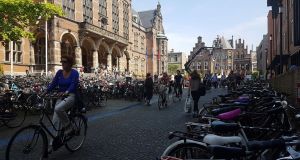 No cars go: the University of Groningen’s Academy Building. The city has a student population of 30,000 – and a car population of zero. Photograph: Paddy Logue

It is most disconcerting when you first arrive in Groningen, the plucky little university city of 200,000 souls in the north of the Netherlands that you have probably never heard of. I couldn’t put my finger on it for a while, but after about an hour realised what it was: there are no cars in the city centre. None.

If you were robbing a bank in Groningen and had the inclination to hijack a vehicle to make good your escape, you would probably end up fleeing on a council-owned battery-powered street cleaning vehicle – it being the fastest vehicle available inside the largest car-free city centre zone in the world.

Groningen, mind you, does not seem to have a problem with crime. Quite the contrary. It is the type of place you’d see in a brochure trying to entice alien life forms to come set up shop on planet Earth – clean, pretty and dripping in practical common sense.

Except for the very odd van delivering to a shop (before 10am), and some buses, the centre of the city is a car-free haven for cyclists and pedestrians, where human activity can breathe, literally, without the noise and pollution that dog so many of our city centres, including Dublin. So much so, most of the city centre does not really have a requirement for cycle lanes. Or not as we know them.

Here you find street after silent street of mingling bicycles and pedestrians. Nor does it require many traffic lights, on-street parking bays, speed bumps or other road furniture associated with most cities.

This is what Groningen in northern Holland looks like ... #cycling https://t.co/h6uSbnXn1M pic.twitter.com/bVU1IjP8PM

The city centre streets in Groningen,which is about twice the size of Cork by population, are instead for people to walk and cycle to their destinations without fear of injury, death or ill-health. This place is cyclist nirvana, where 60 per cent of all journeys are on two wheels.

So what is it like to spend time in such a city? I sat on a pavement terrace for lunch (my son is considering studying in the University of Groningen and we were there to check it out). For almost an hour we counted no private vehicle on the road nearby. In the same 60 minutes, hundreds upon hundreds of bicycles passed us – children with their parents, students, octogenarians, families.

At one point a teacher transporting a class of about 10 playschool children passed us in what looked like a cross between a dumper truck and a segway. The teacher stood on the segway bit at the back and the “bucket” part to the front contained the children. Can you imagine cycling a plastic bucket full of children through Cork or Dublin city centre?

When not moving, bikes are parked everywhere in this city, that boasts a student population of about 30,000 – on every street corner, down every side street and of course in the main squares and at the main train station and university, where large areas are put aside to allow tens of thousands of bikes to be parked for free.

But it does not seem to be the case that cyclists have won and motorists have lost some gargantuan battle, where one lies defeated and the other lords it over the oppressed. On the contrary what we found was a functioning city with a common-sense approach to getting around in the small city centre area for the good of its inhabitants.

Groningen’s plans started back in the 1970s when local politicians introduced a radical plan to stop cars entering the city centre. They broke the city into four parts and barred cars from passing from one quarter to another, thereby making it easier to walk or cycle around the city centre. It was introduced at a time when many other European cities and towns were planning their development around cars, taxis and buses, but it was a decision that had huge long-term benefits.

And they haven’t finished in Groningen. In its cycling strategy 2015-2025 the city plans to introduce even better facilities for people using bicycles. These plans include heating to clear frost and snow from busy cycle lanes in the winter, a cycle tunnel under the main train station as well as the introduction of an extra 5,000 bike parking spaces at the station (on top of the existing 10,000 spaces) and, get this, they want to turn an entire street into a “bicycle street” where “cyclists have all the space they need”.

Meanwhile, in Dublin, and Ireland generally, we are still bickering, blaming motorists, blaming cyclists as we hope for mere baby steps in the direction of common sense. It is well past time for some Groningen-style radical thinking.

First Look: Dig In, the Maser-curated ‘art diner’ that’s about to open in Dublin
9