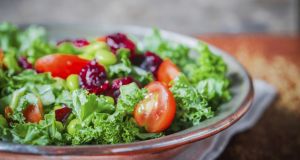 Could it possibly be the case that vegetables are bad for you?

Like it or not, we’re eating kale by the bushel – kale stirfries, kale salads, kale juices – kale in everything. A cruciferous and bitter tasting dark green leafy “superfood” that few people actually enjoy, kale is having its moment. Perhaps it feels virtuous to eat vegetables we don’t like, simply because we believe they’re good for us? Except when they’re not. Like kale.

A California-based molecular biologist, Ernie Hubbard, has discovered a cause of serious illness in kale junkies with exceptionally “healthy” diets. The symptoms sound dreadful, and include: chronic fatigue, skin and hair problems, heat arrhythmia, other neurological symptoms, foggy thinking and gluten sensitivity. Hubbard tested their urine and found large amounts of the toxic metal thallium. Thallium when present in the soil can hyper-accumulate in all cruciferous vegetables, so growers of cauliflower, cabbage, bok choy, broccoli and Brussels sprouts shouldn’t start celebrating the decline of kale’s dominance just yet.

But don’t give up on the five-a-day target just yet: this is just one researcher’s finding so far and vegetables have long-proven health benefits. Besides, Hubbards’ kale-addicted subjects were righteously eating tons of the stuff.

Hubbard, who is known as “the vegetable detective”, had a eureka moment, ran some tests in his houseboat lab, and discovered large amounts of thallium in his ill friends’ urine. When they stopped eating kale, the symptoms went away. The results were reported in Craftsman magazine and picked up by Mother Jones, spurring the latest food scare. More evidence arrived when Hubbard fed kale to non-kale-eaters and their urine spiked with thallium too. He also tested identical non-kale-eating twins with one adding Kale to his diet and the other not. Only the Kale-fed twin had a spike in thallium in his urine, proving that it wasn’t an allergy.

Thallium is a toxic byproduct of coal-burning power stations and cement factories, is fatal in high doses and can cause cancer. While it is within safe limits in Irish soil, it is higher in Dublin than other parts of Ireland, nearly reaching the top of the safe limit, and is also relatively high in Westmeath and north Tipperary.

For the kale queen, Susan Jane White, you might think this would be bad news. White’s Pina Kale-ada smoothie has premiered on the Jamie Oliver website this week, and she is unflustered. The kale issue wasn’t news to her and she still puts small amounts of it in some dishes, but not every day. There’s only an “indetectible” icecube of juiced kale in the Pina Kale-ada, which is made with pineapple, coconut milk and a squeeze of lime.

White says that buying organic makes no difference. Thallium will be absorbed by kale – organic of not – when the soil has high levels, usually caused by poor crop rotation. Her solution is to take advantage of kale’s nutritional value by using only small amounts mixed with other ingredients; and by never purchasing kale or any other vegetable from the same place – shop rotating, in other words – to prevent eating too much of a brand just in case it has toxins. (She does the same with make-up labels.)

In the organic versus non-organic argument, she says, organic can be more worrying because only seven pesticides are allowed in organic farming, leading to the temptation to use too much.

Other vegetables that may be bad for you: Bell peppers and potatoes are especially susceptible to carrying pesticides, while lettuce is little more than water with no nutrition and quite fattening when overdressed. White eats superfoods watercress and rocket instead, which are easy to grow at home.

Fartichokes: those susceptible to the fad for Jerusalem artichokes have learned the smelly way how they got their streetname. But this is a good thing, White insists; these root vegetables contain prebiotics that feed the probiotics in the gut, causing wind, which is actually good for you. Just eat them alone, or leave the table early.

Raw spinach – a current salad trend – has oxylates that bind to iron and calcium making them unavailable biologically. Yes, White agrees, but the oxylates break down when spinach is cooked (try sautéing in garlic – lovely with goat’s cheese in an omelette).

“Don’t be neurotic or obsessive about vegetables or any food,” says White, who has scourged her three-times daily diet of wheat, sugar and dairy and feels better. Her new and second cookbook, The Virtuous Tart, shows how to bake without them. “I hate ‘yes’ versus ‘no’ food fads,” she says. “You won’t feel deprived if you eat what you like – as long as it’s healthy.”

But is it? Where will the next food scare come from? Oh yes, celery. It’s natural toxins can cause tummy pains, don’t you know.