What lies beneath: The difficulty of facing up to an eating disorder

Molly Twomey, a 22 year old student who has written about her experience of having anorexia is keen for other young people to be alert to the irrational thoughts and unhealthy habits of those with an eating disorder. Video: Bryan O'Brien 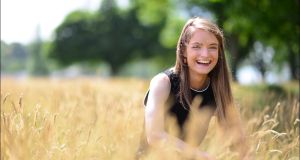 Molly Twomey: “An eating disorder is a coping mechanism for everything you’ve suppressed and it was very difficult to feel all the pain and heartbreak that I’d used my eating disorder to cope with.” Photograph: Bryan O’Brien

Confident and articulate, Twomey is keen for other young people to be alert to the irrational thoughts and unhealthy habits of those with an eating disorder that can often go unnoticed for a long time. She says her disordered eating, obsessive exercise and punishing study routines started in her final years in secondary school.

“I was so focused on study, exercise and diet, but I didn’t fully admit that I’d an eating disorder until my parents brought me to Lois Bridges for an assessment four years later,” she explains.

She now talks freely about how eating disorders are complex and can go under the radar for some time. Twomey continued through school, got an excellent Leaving Cert result, getting her first-choice course at NUI Galway, and really only began to face up to her eating disorder at the end of her second year in college.“My GP in college told me I had an eating disorder, but I brushed it off,” she says.

Yet, for about four years, she had been avoiding so many foods, exercising to the point of pain every day and studying ferociously – often very early in the mornings.

Twomey says: “You can find anything online to support [what you are doing]. When you are young, you believe it – especially if it’s someone beautiful selling it to you.”

Like many young women (and some men) with eating disorders, she moved through several restrictive diets, eliminating crucial nutritional foods without replacing them with adequate alternatives. “I started doing irrational things that seemed rational to me and, after my Leaving Certificate, I stopped eating with my family,” she explains.

Once in college, she became very isolated.

“I didn’t know anyone in Galway and I had all this spare time doing an arts degree. I didn’t go home often because I didn’t want to look like I needed to,” she says. She became a vegan while in college, lost a lot of weight and stopped having her periods. “It was still difficult for me to see that I had an eating disorder.”

Finally, following her assessment at an eating disorders residential centre in Dublin, she returned to university to complete her second-year exams and then signed in to the residential centre for 16 weeks. “It was what I needed. I didn’t need a hospital bed or to be force-fed. I knew there were issues. I wanted to get better and be normal again.”

At the centre, Twomey finally faced up to her eating disorder. “Being with other people with eating disorders, you understand why you do what you do and why it’s so hard to stop,” she says.

Her self-imposed isolation had fuelled her eating disorder and being with others broke that isolation. “I’m very driven and the eating disorder became part of my personality. In Lois Bridges, there was a sense of support and the staff and patients ate meals together, having conversations about things other than food.”

However, facing her buried emotions was challenging. “An eating disorder is a coping mechanism for everything you’ve suppressed and it was very difficult to feel all the pain and heartbreak that I’d used my eating disorder to cope with.”

After leaving the centre, Twomey put college on hold for a semester and returned to her family home in Co Waterford. “It was difficult to go home, but I started seeing a psychotherapist at the eating disorders centre in Cork city,” she explains.

She also began seeing Harriette Lynch, her dietitian from Lois Bridges, every fortnight. “It was terrifying to [start my recovery journey]. It’s about finding a whole new identity. I need constant reassurance that what I’m doing is okay,” she says.

Twomey says that although she’s now much happier trying different foods, she still struggles with taking a day off exercise. “There was a time when I was on the verge of a panic attack going into a grocery shop, but now it’s no bother,” she says.

Lynch says that two years after her treatment, Twomey is much more stable. “High achievement is a classic part of an eating disorder, where food is used as a coping strategy and everything else is done at a high level. When treating an eating disorder, you need to look at the physical, emotional, social and spiritual health of the person. There’s no point in getting weight up to an acceptable BMI [body mass index] if you haven’t the coping strategies to keep at that BMI,” she says.

Lynch stresses the importance of good communication between the patient, the therapists, the GP and family members. “It’s important to build a team around you with the client so that everyone is on the same pathway. I actively encourage family members into the dietician sessions. An eating disorder is a very dynamic condition and [full] recovery can take five to six years,” says Lynch.

In May 2018, Twomey completed her degree in English (having transferred from Galway) at University College Cork. She works as a receptionist on the Cork campus and will start a masters in creating writing soon. She believes she is on the right road, but still needs support on her journey. “You become more resilient. The more you tackle things, the more you can tackle them,” she says.

The detached house in Sutton Cross looks similar to many others on this coastal stretch of north Dublin, yet Lois Bridges is Ireland’s only dedicated residential treatment centre for eating disorders – with up to seven patients at any one time.

The privately-owned centre hit the news in June, 2018, for the wrong reasons, when details of the Mental Health Commission’s 2017 report on Lois Bridges were made public. The Mental Health Commission (MHC) report pointed to several issues with the centre, the most important of which was that Lois Bridges could no longer accommodate seriously ill patients. Its chief concerns were about adequate specialist staff and stipulated certain changes that needed to be made.

Lilly Molloy, director of services at Lois Bridges, says the centre has since complied with the conditions set out in the MCH report. “Previously, about 25 per cent of our nursing staff were general nurses and the MHC’s report stipulated 100 per cent psychiatric nursing staff, which we now have,” she says.

The lack of an acute hospital – and access to medical specialists close to the centre – was another concern for the MHC. “We have worked to overcome this by all patients now seeing a gastroenterologist pre-admission so if needed, they can be discharged back to the hospital that gastroenterologist works in,” says Molloy.

Another specific issue that the MCH has stipulated for Lois Bridges patients is that they have a body mass index (BMI) of 13 or more on admission to the centre. Body mass index is calculated by dividing weight in kilograms by height in metres. Anyone with a BMI of 13 or less is seriously ill and needs to be admitted to an acute hospital. “We had good results with these high-risk patients before but now we don’t accept anyone with a BMI of less than 13.5. Our programme is suitable for patients who are not at risk of suicide and who are cognitively able for an intensive programme,” explains Molloy.

Lois Bridges accepts adult patients with private health insurance, their own funds and referrals from the HSE. “About one third of our patients are HSE referrals, while two-thirds have private health insurance or their own funds,” says Molloy. Each patient partakes in a structured therapeutic programme which also includes recreational activities, family therapy and a year-long after-care programme of monthly visits back to the centre.