‘We have more dignity’: Taking the dread out of periods for homeless women 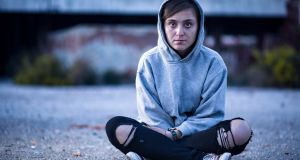 With most women needing more than one pack and many also needing painkillers a woman’s 13 periods cost more than €100 per year. Photograph: iStock/Getty Images

In a scene from I, Daniel Blake, Katie, a young, single mother visits a food bank and, while picking up some vegetables and other staples, asks if they have any sanitary towels.

Later on, after paying for some groceries, Katie is stopped by a security guard and accused of shoplifting. She empties the contents of her handbag and the first item she takes out is a packet of sanitary pads.

The film, particularly the shoplifting scene had a huge impact on Claire Hunt who runs Homeless Period Ireland. Women and girls being unable to access and afford sanitary products was something she never thought about before watching the film, but soon afterwards she got involved with the Homeless Period project in Dublin and widened the initiative to Limerick and other areas, with plans to now expand into Galway, Waterford and Sligo.

The project, which operates solely on a volunteer basis has provided more than 10,000 sanitary items to those in need in the past year alone. Its team of 30 drivers pick up tampons and sanitary towels left by the public at locations such as chemists, beauty salons and shops and distributes them to groups helping the homeless, as well as women in direct provision, women’s shelters and third-level institutions such as UCD and the University of Limerick. Some Deis schools have recently begun to contact Hunt for donations also.

“Period poverty affects those that don’t have access to products, and also people who don’t have the spare cash to part with every month,” says Hunt. “You get all the smart answers, ‘oh you can get them in Dealz for €1 etc’, and yes, you can, but if you’re dealing with people who are in massive poverty trap, every euro counts. If you’re a woman in a poverty trap and there’s no husband around and you’ve four teenage girls, that is a big spend. And this is before all the extras that a lot of us get like Neurofen and 10 bags of Haribo.”

Sanitary towels range in price from about €1.20-€6 with an average pack containing 10-14 pads with tampons costing between €1.50 and €6. With most women needing more than one pack and many (up to 70 per cent in a recent Plan International survey) also needing painkillers (priced from €1.95-€4.20) a woman’s 13 periods cost more than €100 per year.

With your last few pound, you want to get what you need for the kids

The scene from I, Daniel Blake would have been familiar to Linda*, a 42-year-old who has been homeless for four years and now lives in Dublin Simon Community’s supported temporary accommodation. “When you’re out there and you’re homeless and you ring up [the Dublin Region Homeless Executive to find a bed for the night] and you’re told to ring back at 4.30pm, ring back at 10.30pm and then all of a sudden your period comes on, it could be eight o’clock at night. You haven’t a penny in your pocket. You go into the nearest toilet and get a bit of tissue and wrap it up and put it down there which doesn’t hold for very long. And you know your first day is light, it’s your second day is the heaviest day and with that then I would go down to Merchants Quay [Homeless and Drugs Services in Dublin] and maybe I’d get a pad there.

“There was an incident once at Merchants Quay, it closed down for two days, I had my period and I walked around with bloody jeans and bloody knickers for two days. I felt foul. I actually had to go in and rob a pair of underwear out of a second-hand shop and a pair of jeans but I still didn’t have anything to use so of course I had to go into a shop and rob a box of tampons. Open a box and take two or three out of a packet and put them in my pocket . . . That is embarrassing but you have to do what you have to do.”

While Homeless Period Ireland now provides Dublin Simon with sanitary products, Linda started using the Depo-Provera contraceptive injection a year ago and no longer has periods. “It is heaven,” she says. “It wasn’t about a sexual relationship at all. It was just so I wouldn’t bleed.”

Her friends Bernie (29)* and Carol (37)* faced similar situations when they were on the streets. “Linda’s story is my story,” says Bernie. “There was such a sense of dread [over getting her period]. But we are safe here now, we can get a shower straight away, you can change your clothes. We have more dignity.”

Money is the key factor in being able to access sanitary items. For the service users at Saol, a community project focused on improving the lives of women affected by addiction and poverty in Dublin, donations from Homeless Period Ireland have been a huge help in helping the women get by.

Jane McNicholas, team leader at the centre, says that before the initiative started up they were only able to offer limited supplies, a tampon or a pad or two at a time which women had to ask for and were often reluctant to do so. Not having access to products often resulted in service users not coming into the centre for classes and support when they had their period.

Now, women have access to full packets of sanitary products in the kitchen whenever they need them and can take them without having to ask.

Julie*, who avails of the products at the centre says it’s “one less thing to worry about. With your last few pound, you want to get what you need for the kids,” she says. Before having access to products at Saol, she often used a sock. “You’re thinking people can see the bulges, it’s embarrassing.”

Hunt hopes that Homeless Period Ireland will not always be needed. She would like to see Ireland follow, and go even further than Scotland, which recently became the first nation in the world to make tampons and pads free for all school, college and university students. Such a campaign is beginning to gather some momentum. Last September, Dublin City Council passed a motion to provide free sanitary products in all the council’s buildings such as libraries and swimming pools, while Fianna Fáil Senator Lorraine Clifford-Lee has called for a national programme “to improve access to sanitary products” for all women and girls in Ireland.

“Women are going through their period every month and not having the means to look after themselves,” says Hunt. “They are using kitchen towels or toilet paper, and it’s just wrong, very wrong. This project is completely about dignity.”

We’ve got new lockdown rituals, but man, I miss the old ones
5