Walking the dog in the snow? Careful of salt and de-icers

Rock salt, in particular, can be tough and jagged to a dog’s soft paw 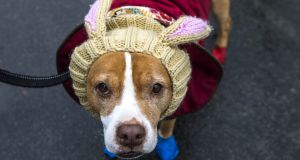 They are the cold-weather bane of city dog owners, dog walkers and the dogs themselves – the salt and chemical de-icers that are sprinkled on streets and footpaths when it snows.

When Kena Gabrielle, the owner of a dog-walking service, took her client’s dog out for a stroll, a bootie accidentally fell off his foot. “Even for a split second, he started screaming, literally,” said Gabrielle, who walks 10 dogs daily and has three of her own. “It’s a heartbreaking sound.”

The use of these materials can vary from street to street. Larger commercial buildings and high-rises are more likely to use chemical de-icers, which are often cheaper than pet-friendly brands. But many dog owners and experts said they follow a proceed-with-caution approach, because it is usually difficult to discern the difference between the good and bad salts in time, or at all.

Rock salt, in particular, can be tough and jagged to a dog’s soft paw, said Dr Erin Wilson, a veterinarian and the former medical director of the ASPCA Adoption Center in Manhattan. The crystals are comparable, in a human context, to a sharp stone lodged into a boot. If the dogs’ paws have any aberrations or cuts, the salts will burn.

Chemical de-icers – particularly those containing the antifreeze material known as ethylene glycol – pose, perhaps, the biggest threat: Not only will a dog hold up its paws in pain and temporarily limp away, but the ingredients can also prove harmful should a dog accidentally ingest them. Salt is also dangerous.

“It can be really bad for their kidneys, or other organs,” Dr Wilson said. “That’s why it’s really important, if your dog isn’t wearing booties, to wipe their feet, belly and undercarriage off thoroughly with a towel when you come home from a walk.”

For longer walks, Wilson suggested bringing a towel along. Once home, she said the dog owner should check a dog’s paw pads for cracks and toes for redness. She also recommends pet-friendly melting products, containing propylene glycol, to building owners and managers.

Booties are also a popular option.

On a walk one day, Michael Friedland’s dog began to whine. Seeing what looked like a puddle of water nearby, Friedland dipped his dog’s paws in it. It turned out to be liquid chlorine. “That was even worse,” he said.

So, alongside his father, Gary – who faced similar woes with his Jack Russell terrier – Friedland started Pawz, a Brooklyn-based company that produces rubber dog booties, in 2005. “Everyone would ask my dad where he got them from,” he said. “Because everyone kept experiencing the same problem.”

In Ireland, stores such as Molly’s Pet Boutique, Pet World andEquestrian World all do lines in booties for dogs.

For dogs who may not enjoy the winter accessory, Dr Wilson said praise or treats should be used in advance to prepare the pet. “You don’t want the first time you have to use them to be during a blizzard,” she said. When Dr Wilson first dressed her corgi in them, the dog went into what she described as “bootie paralysis,” falling over and refusing to walk.

“My best advice would just be for owners to examine the state of the sidewalk,” Dr Wilson said. “If there’s no snow or ice present, there’s a good chance that a de-icer was used.”