Travellers and people with disabilities must use their vote for change 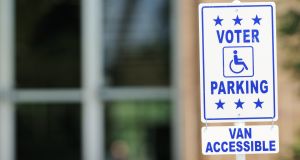 Historically, the postal vote was the only option for people with disabilities. Official designated polling stations were not accessible. Photograph: iStock

The American mid-term elections last November saw a powerful surge in the number of women elected. Within this cohort, an unprecedented number of Native-American, African-American, Muslim and LGBT women were victorious.

Key issues of healthcare, housing and education were priorities in all manifestos. Political pundits argue that this victory for women in the context of diversity and inclusion is progress in motion. Women dropping the ladder for marginalised people has always been our way of entry. Politics should reflect diverse segments of our country.

If there is no room, let’s make room.

Citizenship, inclusion and diversity are the core fundamentals that underpin democracy. In Ireland, things are a bit different. Change is slower and there is a lot of complacency regarding voting and electoral representation. If there’s no reflection of you within the political system, it’s difficult to imagine a democracy that encourages and empowers you to participate. The subordination of certain groups of people brings a sense of detachment. Voting seems pointless. Inferred incompetence is a manifestation of prejudice.

In order to ensure inclusion, we need a diverse group of people at the helm of Irish politics.

One is never enough.

Dissatisfaction and apathy coupled with a sense of being forgotten are powerful incentives for Travellers and people with disabilities to use their vote in the local and European elections on May 24th.

The radical results of the last two referendums regarding same-sex marriage and the Eighth Amendment shook the Irish political system. One would be forgiven for believing we have embraced diversity. Even with an openly-gay Taoiseach of Indian descent, there are explicit reminders that quite a few of us are living in a parallel universe. A parallel universe where oppression, discrimination, poverty and a sense of isolation are the lived reality.

My identity as Traveller woman with an impairment propels me to segway through racism, ableism and sexism. Stigma, shame and discrimination prevents people from embracing their identity in a public way. Identity issues are tricky. They should not define you, or be used to impede you, but be an integral part of your reasons for engaging in politics. Values, principles and ethics related to oppression and grass roots activism makes for real politicians.

There will be candidates with disabilities intending to participate in the local and European elections of 2019. Historically, the postal vote was the only option for people with disabilities. Official designated polling stations were not accessible.

This is still the situation.

Polling stations are usually primary schools – the fact they’re not accessible tells another worrying story. Ireland’s undocumented history of disabled lives included a specific requirement – a certificate of sanity from your GP in order to exercise your right to vote. Feminist writer Naomi Klein suggests “democracy is not just the right to vote, it is the right to live in dignity”.

In the early ’90s, director of the Forum of People with Disabilities Donal Toolan successfully campaigned for the removal of a certificate of sanity in the context of voting. The Irish Human Rights Commission recommends that an electoral commission should set standards for the use of polling stations that are compliant with the constitutional right to vote and the obligations of all public bodies under S.42 of the Irish Human Rights and Equality Act, 2014. Persons with disabilities should participate in the setting of such standards, the implementation of which an electoral commission could monitor by developing appropriate performance indicators.

Institutional racism tells a very disturbing narrative. In 1965, Selma, located in Dallas County, Alabama, was the focus of a black voter registration campaign. The Voting Rights Act of 1965 was a response to racism experienced by African-Americans. It outlawed the discriminatory voting practices adopted in many southern states after the American Civil War.

In February 2019, the Minceirs Whidden Traveller forum launched a voting pack for Travellers to register to vote. Barriers such as literacy and not having a permanent address prevent Travellers from voting, or running for election. Voting in the Seanad elections requires urgent reform – including the need to broaden the franchise to Irish Travellers, given that less than 1 per cent of Travellers go on to third-level education.

It is vital for all politicians and political parties to adhere to the anti-racism electoral protocols. Martin Collins, co-director of Pavee Point Traveller and Roma Centre, states hate crime and stronger hate speech legislation is crucial.

Platform Series: Rosaleen McDonagh
1) He’d look for a kiss from his gypsy girl
2) Perniciousness of racism and ableism
3) Life should be about living, not existing
4) The disabled spoil the presentation
5) When will there be an official apology?
6) Theatre access for those with a disability
7) Believing disabled sexual assault victims
8) Marginalising disabled feminists
9) Use your vote for change