‘Delirium is a warning sign of real danger for the brain’

Delirium has often been dismissed as simply ‘the patient is just confused, it will pass’ 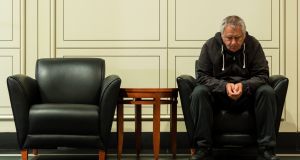 A delirious patient may be sitting quietly but have no clear idea of where they are, or what time, day, month or year it is. Photograph: iStock

“Death, having preyed upon the outward parts,
leaves them invincible, and his siege is now
against the mind; that which he pricks and wounds
with many legions of strange fantasies,
which in their throng and press to that last hold
confound themselves.”

This is William Shakespeare’s description of delirium in his play, The Life and Death of King John. The reference to strange fantasies chimes with our commonly accepted understanding of the central part hallucinations play in delirium. But recently, a more hypoactive version of the illness has been recognised as doctors and scientists develop a deeper understanding of the condition.

When older patients, and particularly those with early dementia, suffer acute illnesses or hospitalisation, they often have profound and disturbing changes in their awareness, their thinking and memory and in their emotional state. This syndrome is known as delirium. These are disorienting, fearful and distressing episodes and although they tend to resolve as the acute illness passes, patients may experience long-term consequences.

Dr Colm Cunningham, associate professor of neuroscience at Trinity College Dublin, is a leading laboratory researcher in delirium. His research focuses on using animal models to try to understand what actually occurs in the brain during these acute episodes. “We have shown that inflammation and metabolic changes outside the brain have significant impacts on brain function in mice made vulnerable by old age or early-stage dementia,” he told The Irish Times. “So we are illustrating that delirium is the failure of the vulnerable brain to maintain normal function under acute stresses like infections, surgeries and injuries and we’re using these mouse models to identify the most important pathways in causing this brain failure.”

A 2013 study in Cork University Hospital found a delirium rate of about one in five patients in an Irish general hospital. However, the scale of the illness may not be appreciated because it can be difficult to recognise. In its hyperactive form, delirium is easily picked up because patients may be very agitated, distressed and uncooperative, but the hypoactive form is much harder to detect.

A hypoactive delirious patient may be lying or sitting quietly in bed, but have no clear idea of where they are, or what time, day, month or year it is. They may be feeling extremely fearful and distressed but unless someone communicates with them, it may not be apparent that they are experiencing delirium. So formal cognitive assessment by an occupational therapist is important, as is listening to the family who can help flag a change in their relative’s thinking, memory or attention.

Should we be giving delirium greater attention?

Cunningham thinks so: “Delirium is a warning sign of real danger for the brain. It is often thought of as an acute brain failure. Failure in other organs triggers all sorts of urgent actions, but delirium has often been dismissed as simply ‘the patient is just confused, it will pass’. We need to change this attitude,” he says.

A very high number of patients in intensive care also experience delirium and, depending on the severity and duration of the delirium episode, this can have long-term consequences for brain function. These patients need careful assessment at discharge and follow-up support. And there is a growing recognition of how surgical operations in older people can be a trigger for delirium.

Dr Cunningham is one of the speakers at a public meeting at Trinity College Dublin on Tuesday evening to explain what is known about delirium and to look at the illness from a patient perspective.

“Delirium: when acute illness meets dementia” is on Tuesday, April 16th at 7pm at the Tercentenary Hall, Trinity Biomedical Sciences Institute, TCD (entrance on Pearse Street). The event is free, but those attending are asked to register in advance at eventbrite.com