The physical toll of workplace bullying is a silent killer

Cardiovascular impact of bullying similar to that of diabetes and alcohol, says new study 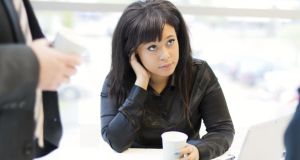 Confronting a bully can seem like a daunting task when your confidence and self-esteem have taken a hammering. Photograph: iStock

Walking into work on a Monday morning can instil a feeling of apprehension for the week ahead. Picking at our fingernails, watching the clock and worrying we’ll sleep through our alarm is all part of normal “Sunday night fear” as we nervously wait for the week to begin.

The meetings, the deadlines, the ordinary momentum of the working week can stir these regular anxieties as we strive to do our job well.

For some, that edginess of joining colleagues in the morning is terrifying, almost crippling, as a result of bullying. Anxiety, stress, physical illness, depression, all culminates from a culture of fear which lies under the flooring in many organisations.

Further to this, we are now told bullying and violence can have a detrimental effect on our cardiovascular health. Scandinavian researchers looked at more than 79,000 working men and women in Denmark and Sweden with their findings published in the European Heart Journal late last year.

The study authors acknowledge that stressors such as workplace bullying and violence may contribute to mood disorders such as depression, anxiety or encourage unhealthy behaviours including smoking or eating and drinking excessively.

In a press release, Tianwei Xu, lead author and doctoral student at the University of Copenhagan said: “The effect of bullying and violence on the incidence of cardiovascular disease in the general population is comparable to other risk factors such as diabetes and alcohol drinking. It is important to prevent workplace bullying and workplace violence from happening, as they constitute major stressors for those exposed. It is also important to have policies for intervening if bullying or violence occurs.”

We all deserve and are entitled to a bully-free work environment, but this is not always the case as employers fail to acknowledge and address bullying in their workforce. What may seem like friendly banter on the outskirts can be detrimental to the physical and mental health of an employee. Bullying is not simply a personality clash. It is not jovial small talk, or a once-off heated debate. It can be a silent killer as victims are antagonised, belittled and made suffer in taunting ways at the hands of their manager, their colleagues or their peers.

We sometimes forget that bullying is not the finger nudging and name calling we associate with the playground. But rather it is the psychological deterioration of a person’s mind through verbal, physical or online bullying. Intimidation, aggressiveness, being unnecessarily targeted, excluded and taken advantage of, are some of the more obvious ways bullies treat their victims with their methods being honed specifically to a person’s character in order to diminish them.

The Health and Safety Authority defines bullying as, “repeated inappropriate behaviour, direct or indirect, whether verbal, physical or otherwise, conducted by one or more persons against another or others, at the place of work and/or in the course of employment, which could reasonably be regarded as undermining the individual’s right to dignity at work.”

Resilience and Life Coach, Siobhán Murray, is the author of The Burnout Solution. She says, “Bullying, in any form, can impact our physical health in a similar way the body deals with our secondary stress response. It’s important to understand that our bodies are programmed to deal with primary stress and can automatically recover from what is perceived as an immediate, or urgent, stressful situation.

“With a primary stress situation our muscles will automatically tense, our breathing increases, our liver, digestion, blood, sweat glands and bladder all kick into action to react to the immediate stress. With secondary stress, which can be brought on by bullying, all the organs in our body that are fired into action in response to a primary stress are put into continuous pressure.

“Our bodies are not designed to stay in the high stress response state and when it is under stress from bullying our skin, heart, muscles, lungs, blood, cholesterol, liver and even our digestive systems are compromised. Continual stress on our hearts can lead to strokes or heart-attacks, the increased oxygen needed for our lungs can cause blackouts, our digestive systems can shut down causing ulcers and our sleep patterns can be disrupted causing decision-making more difficult.”

We also know bullying has a catastrophic effect on our mental health. Murray outlines, “Bullying causes self-doubt, lack of confidence, poor self-esteem which can lead to depression and a spiral of negative thoughts.”

Confronting a bully can seem like a daunting task when your confidence and self-esteem have taken a hammering and your physical health is poor as a result. Without evidence it can feel like a battle of their word against yours. There are a few simple steps to take before taking a case of bullying against a colleague. It is important to keep a diary with the details of events including times, dates and names of any witnesses. Your employer should have made you aware of all company guidelines including that of bullying and harassment. If you do not have this policy, contact human resources who will provide you with the policy. Understanding the policy is the next step in addressing any bullying and harassment. There are procedures to consider with most employer’s requesting that the issue be addressed informally in the first instance. This is not always possible for the person who is being bullied as intimidation and fear play a large part in harassment.

“Having someone in work to speak to – your boss, if appropriate, or HR department – and explain how you feel,” is essential says Murray. “Seeking outside work support such as a psychotherapist who can support you in rebuilding your self-esteem and emotional resilience would be hugely beneficial in giving you the confidence to confront the situation.”

Confronting the issue and resolving a bullying case does not end the victims torment, however. Overcoming a negative mind frame, rebuilding their confidence and coping with the fear of repetition from bullying can be an ongoing issue. Murray suggests using, “cognitive behavioural therapy (CBT) to work though negative thoughts and feelings. It is a very powerful way to move away from holding on to the negative feelings associated with bullying. CBT can be worked through independently, however, I would suggest that initially seeking the support of a therapist would be most beneficial.”