That’s Men: Tackling a bully at work can sometimes be the best solution

I heard myself say the words, ‘Don’t, you, ever, speak to me like that again’ 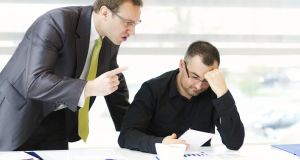 Reader responses to a recent column illustrate important points about dealing with bullying in the workplace. Photograph: Thinkstock

My recent column on bullying in the workplace brought responses that illustrate important points about dealing with this behaviour.

“In my late 20s I experienced workplace bullying from a pugnacious boss,” writes one reader. “I put up with it for two years because I loved the job, even though I often vomited before leaving home in the morning with the stress of facing my boss that day.

“Then one morning, during yet another foul-mouthed dressing- down – being blamed for something that was not under my control – something switched inside me and I heard myself say the words, ‘Don’t, you, ever, speak to me like that again’ . . . I slowly turned and left his office.

“What I’d done wasn’t a conscious act, it was purely instinctive. In fact, I don’t think I could have stopped those words coming out. As I shut the door I thought, ‘Right, better start looking for a new job.’ I figured it was a career-ending moment, but I felt strangely calm about it.

“Guess what ? Nothing happened . . . for several days. Next time I had my regular meeting with him, he was pure sweetness and light. In fact, from that day on he treated me with absolute respect.

“I stayed for another seven years and loved it. He kept bullying other managers but I never had another problem with him. In fact, he promoted me several times and always rewarded me well at annual review time.

“It taught me a lesson. If the work you do is valued, you will not be fired for standing up. If it’s not . . . why would you want to stick around?”

Another reader found it necessary to leave a job because of bullying. She writes: “I have met workplace bullying and I would agree that the person being bullied is often very good at their job but the bully can be  too. Consequently, when one complains about the bullying, the boss or manager is reluctant to deal with the bully, probably because they wish to hold on to the bully or is dependent on that person. I think the bully can see the ‘victim’ as a threat to their supremacy in the job.

“I left the workplace on one occasion because, as you said, going into work can be a cause of stress. As Eckhart Tolle said, ‘Better to be in a good energy zone’ but it did annoy me to think the bully won. I have got over that since.”

For me, these responses emphasise two key points about workplace bullies. The first is that sometimes they are blind to the effects of their actions.

This is why it can be so important to discuss the matter with the person who is dishing out the distressing behaviour.

Sometimes the person will be startled at the effect that he or she has been having on someone else or they are so unused to being challenged that they back off.

But sometimes bullies know what they are doing and that seems to be the kind that the reader who sent the second response met. They may see the victim as a threat, they may just value or even enjoy an aggressive style, or, and this happens, they want to push the victim out so that he or she can be replaced by somebody else. In a case like this, leaving may be the only thing that is going to preserve a person’s wellbeing. As the reader points out, that is not so easy to do because nobody wants to be bullied out of the job.

Notice, by the way, that the reader who had a happy ending, after he confronted his bully, used to get sick before he went to work every morning because of the stress of meeting this individual.

That’s a striking and telling example of the extent to which bullies wreck the peace of mind and wellbeing of those whom they target. Unfortunately, it is by no means as rare as it ought to be in the world of work.