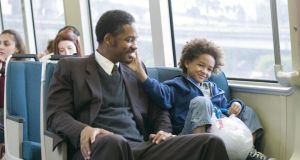 The pursuit of happyness: In the movie, Will Smith and his son struggle to find a home.

Noticing men morosely working in a hole in the ground on a cold, grey November day, it struck me that there are limits to the pursuit of happiness, and this was one of them.

You can’t be happy when you’re standing in muck below street level being observed glumly by what I took to be some sort of supervisor.

Right now, all over the world, I reflected, men (and women) were stuck in exactly that situation: in a hole in the ground, wishing the end of the working day would hurry up.

Then I remembered a blog post in the research digest of the British Psychological Society and I cheered up. Not everyone wants to be happy, it said, quoting an article in the Journal of Happiness Studies. Yes, there is such a journal.

Many people deliberately dampen down their positive moods, believing that if they let themselves be happy, something bad will happen (but as my fellow pessimists will agree, something bad is going to happen anyway so they’re wasting their time).

Moreover, it appears that in many countries – New Zealand, for example – people are afraid of happiness and would agree with statements such as “I prefer not to be too joyful, because usually joy is followed by sadness”.

People in East Asia take a similarly gloomy view while the journal article, by Moshen Joshanloo and Dan Weijers, even quotes the Prophet Mohammad telling the faithful to “avoid much laughter, for much laughter deadens the heart”.

Then you have the increasing popularity of Buddhist ideas in the West with their belief that life is suffering.

Some years ago I quoted the late Therese Brady who referred, in a lecture to the Psychological Society of Ireland in 1990, about how the idea that we all have oodles of potential which we should fulfil intensifies “the misery of those who were unhappy when they contrasted their state with what they perceived to be the state of perpetual joy and fulfilment of the rest of the world”.

So we’re all agreed then: happiness is a tricky thing and, like electricity, it has to be handled with enormous care, though it isn’t as useful as electricity.

Actually, no, not everybody. For instance, shortly after he came to power, David Cameron announced that happiness would be officially measured because things such as the Gross Domestic Product don’t tell the whole story. There’s more to life than money, he said, which I presume is why, five years on, so many Britons are relying on food banks though that, I guess, is another story.

We don’t hear a lot about happiness from Cameron anymore but the fact that he put forward the idea at all illustrates that the pursuit of happiness is presumed by many to be a good thing.

We are a long way from standing in a hole in the ground on a cold, wet day. What all this means, though, as far as I am concerned is that there may be nothing at all wrong with being miserable. There is also no need to be unhappy about being unhappy or sad about being sad.

I am not saying that you should rush out and buy or rent your own hole in the ground that you can stand in on cold days, philosophising.

All I’m saying is to lighten up about being unhappy. It doesn’t really matter all that much because, well, you know where we’ll all going to end up anyway.

But if I meet you in the next few weeks and I wish you a Happy Christmas, please be assured that I am absolutely sincere about it. Anyway, there’s always January to look forward to.

You can read the British Psychological Society blog at bit.ly/noneedtobehappy