‘For me my mouth is my hand, it’s second nature for me to hold a brush’ 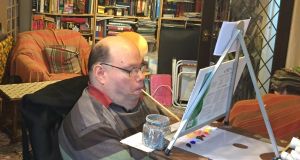 Artist Ian Parker: “It’s the technique of painting itself that is a challenge, to anyone, disabled or able-bodied. It requires skill and practice and patience.”

When artist Ian Parker was growing up in the West Sussex market town of Crawley, he didn’t see himself represented in the books he read.

Parker was born with arthrogryposis multiplex congenita (AMC), a condition that renders his limbs unusable. He was aware of his difference from an early age, and while there was “nothing in literature to aspire to”, he found a role model in Douglas Bader, the wheelchair-bound second World Warpilot who turned his disability to his advantage, flying planes with the RAF in the Battle of Dunkirk, the Battle of Britain and during the Blitz. “It was his attitude that I admired as much as his achievements,” Parker explains over the phone from his home in West Sussex, where he still lives. “He didn’t give up, and that is the message that I always like to give to people.”

Indeed, perseverance is the resounding moral of Parker’s first picture book, Danny’s Dream, which has just been published by Mouth and Foot Artists.

Without books to inspire him, drawing, where he could create his own reality, was Parker’s childhood pastime of choice. He honed his skills throughout his teenage years, eventually turning to painting, taking a degree in fine art and dedicating his life to art. He is one of 800 artists who work with the Mouth and Foot Painting Artists partnership, an international cooperative run by artists with disabilities, who use their mouths and feet instead of their hands to paint. The artists work year-round to produce designs for a variety of products, including Christmas cards and calendars, and Parker has been creating paintings for them for the last 25 years. With an invitation from the association to work on its first children’s book, Parker has, perhaps, become the first disabled artist to illustrate a book about a disabled character.

Danny’s Dream, written by Victor Margiotta, tells the story of a champion child runner Danny, who dreams of performing in the Olympics. When he is injured in a tragic accident, he loses the use of his legs. However, he doesn’t lose his ambition, and after years of rehabilitation and hard work he becomes a Paralympic athlete: the gold medal he dreams of will be his after all. Although Parker was born with his disability, he says it was easy to empathise with the character as he created him on the page. “I can totally understand the frustrations and fears that Danny faces, having to readjust his dreams according to his abilities. Danny’s aspirations have to change but that can happen to positive effect, and I can fully appreciate his determination not to give up. It’s a lesson in how to persevere, and that is something I have always had to do.”

Parker is talking about life in general as a disabled person, but also, specifically, about his journey with Danny’s Dream. Despite his artistic mastery, when Margiotta first spoke to him about collaborating on a book, “I didn’t really know if I could do it. It was like a crash course in illustration. I had to learn how to help develop a character and an environment, how to make each page relate to another.”

It was a long process, which lasted almost 2½ years. Designing Danny’s wheelchair – a fantastical affair with wheels of fire – itself took almost two years, “and there was a lot of discussion back and forth between myself and Victor about what worked and what didn’t”. The time and patience translates into beautifully detailed watercolour images, which add depth to Danny’s world.

As inspiring as Danny’s story is, however, the books gets an extra edge of inclusivity when readers turn the final page to read the biographies of its makers. A large photo of Parker at work at his easel quickly becomes a talking point about his artistic process, and children, he says, are equally as fascinated by his story as by Danny’s. When Parker has the opportunity to expand upon it, however, his conversation with children takes a different, more universal, turn. “When I talk with children at schools,” he concludes, “I tell them about how difficult painting is. Not because I use my mouth, though; for me my mouth is my hand, it’s second nature for me to hold a brush. It’s the technique of painting itself that is a challenge, to anyone, disabled or able-bodied. It requires skill and practice and patience.”

Danny’s Dream, just like Parker’s achievements, has lessons for us all.