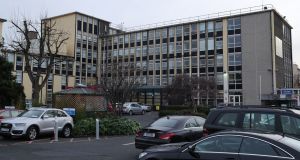 Dr Corbett is clear that Ireland delivers ‘some of the highest quality obstetric care in the world’. Photograph: Niall Carson/PA Wire

A unique historical perspective honouring the work of Dublin’s Coombe Women & Infants University Hospital has appeared with the publication of “Childbirth in Ireland’s capital city over sixty years” in the Irish Journal of Medical Science.

Researchers, led by Junior Registrar at the Coombe Dr Gillian A Corbett, reviewed clinical reports over the last 60 years to gauge how the practice of obstetrics and gynaecology has changed from the 1960s to the present.

They uncovered a fascinating trove of information into the country’s obstetric history, reflecting the progression and sophistication of Irish society over the past 60 years. Before delving into the trove, let us look back beyond the 1960s to 1826 when Mrs Margaret Boyle founded the maternity service with a gift of £100, and on July 17th that year, the Coombe Lying-in Hospital opened its doors.

On September 11th, 1926, the Lancet medical journal announced that the Coombe would mark its centenary “from Tuesday Sept. 14th, to Friday Sept. 17th”, with celebrations including the first international medical congress to be held in Dublin and a performance of Seán O’Casey’s Juno and the Paycock at Dublin’s Abbey Theatre. William Butler Yeats announced that he and his fellow directors had chosen the play because “when guests had come to honour the work the Coombe Hospital was doing among the poor of Dublin, it was suitable to show them a play dealing with life in the Dublin tenements.”

It is estimated that more than 300,000 babies were born in the “old” Coombe building before 1967, when the present building opened. It cost £900,000 and took two years to build, completely furnished and equipped, and it was then the biggest maternity unit in Britain and Ireland.

Dr Corbett, who this year completes her Basic Specialist Training, as she progresses towards a career as a consultant, told The Irish Times that the project was conducted under the guidance of Prof Nadine Farah, professor of Obstetrics and Gynaecology at the Coombe.

Are there any particularly significant findings?

“The decrease in both maternal and perinatal mortality rates (PMR) is remarkable,” says Dr Corbett. “These demonstrate how far Ireland has come in a relatively short period of time. Maternal mortality has decreased four-fold (from 4 deaths to 1 death in 100,000 births), which is one of the world’s lowest mortality rates.”

And the improvement in PMR (from 48.5 to 5.4/1000 live births) reflects the high-quality care at the Coombe, she adds: “This means there was a nine-fold decrease in the chance of a baby dying during pregnancy, labour or shortly after being born. Again, this rate is lower than other western countries like the UK, Canada and the USA, demonstrating that Ireland is a safer place to have a baby.”

Data gathered since the 2000s reflect recent global changes, in terms of migration and altered dietary habits. For instance, since the 2000s, when Annual Reports at the Coombe included the mother’s place of birth, “the proportion of women in the booking population born in Ireland has dropped from 77.0 per cent in 2000s to 70.9 per cent in 2010s. During this period, the number of mothers from other EU countries has increased (1.0 per cent to 12.1 per cent), as did the number of Asian mothers (3.6 per cent to 5.1 per cent).”

The study has also shown a trend for women to have smaller families, with the authors commenting: “The widespread availability of contraception, the emphasis on the woman’s choice to conceive, and the entry of women to the workforce have undoubtedly played a role in these changes.”

With the Coombe’s bicentenary looming on the horizon, what are Dr Corbett’s thoughts on the next 60 years? “Over the past 60 years,” she explains, “obstetric practice has changed to adapt to the patients it serves. I suspect this will continue, and cultural and social change in Ireland will guide obstetric trends over the next 60 years.”

Dr Corbett is clear that Ireland delivers “some of the highest quality obstetric care in the world. I’m lucky to work with and learn from outstanding obstetricians and midwives at the Coombe. It’s down to the dedicated people working at the coalface of maternity services that Ireland is a world leader in obstetrics”.

Perhaps the bicentenary would have presented a fitting opportunity to display some artefacts from the past, but unfortunately, all the effects from the “old” Coombe were sold at auction for around £2,000.