Struggle with sleeping? Cut out alcohol for six weeks 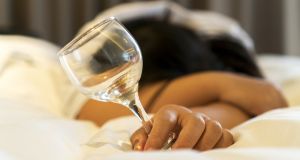 The long-term effects of alcohol on sleep are rather devastating, such that deep sleep almost disappears in alcohol-addicted people. Photograph: iStock

The experts seem to agree: what defines the connection between nutrition and sleep is a lack of sufficiently thorough, long-term research on how one is proven, rather than assumed, to affect the other.

But the consensus extends to the two cheerleaders in the “Please Avoid” camp – caffeine and alcohol – after which, opinions will differ.

“Caffeine not just impacts your ability to fall asleep, but it also means having a lighter sleep,” says Sarah Keogh, a consultant dietitian at Dublin’s Albany Clinic, who recommends no caffeine each day from mid-afternoon.

“People might say, ‘it doesn’t bother me’. But it’s only when you take it out, people realise after three or four weeks they are sleeping better. Coffee is always considered the strongest source, but with tea, it depends on how long you let the tea bags sit.”

Keogh points out that where the results of coffee consumption studies appear to contradict one another, pay heed to the amount of coffee in each study, and the qualifications of those making the claims.

Three to four cups a day also sits right with Prof Christian Cajochen, head of the Centre for Chronobiology at the University of Basel in Switzerland, but only if they’re consumed at least four hours before bedtime.

“However, every coffee has a different caffeine content; genes define how quickly someone metabolises caffeine,” says Cajochen. “And you can also find it in chocolate, some teas and energy drinks, so it’s not enough to just count the cups of coffee per day, particularly for teenagers.”

“Although this sounds not so dramatic, it only reflects the acute effects of alcohol. The long-term effects of alcohol on sleep are rather devastating, such that deep sleep almost disappears in alcohol-addicted people. Deep slow wave sleep is very important for memory formation, cognition, attention and wellbeing the next day.”

But, as Keogh points out, even one glass of wine in the evening can be enough to affect sleep quality: if in doubt, cut out all alcohol for a trial run of six weeks and witness the difference.

And don’t go to bed with either an empty or full stomach, says Keogh. A small glass of milk before bedtime could help settle you but, aside from that, try getting most of your fluids through you earlier in the day.

“Some people have bladders like camels and it makes no difference, but you will notice yourself what your cut-off time is. On average, it will take two hours to have most of the fluid through your system, and then it shouldn’t disturb you in the night.”

Research in the US suggests that foods such as pineapples, bananas and oranges are able to naturally increase our melatonin production, while oats, sweetcorn, rice, tomatoes and barley can play a part too.

According to a Korean study published last year in the “Journal of Medicinal Food”, night milk (that which is milked from a cow at night) contains far higher amounts of tryptophan and melatonin than is found in regular milk.

Melatonin is produced in what’s called the “tryptophan/serotonin pathway,” says consultant dietitian Orla Walsh. “For this reason tryptophan, melatonin and serotonin within the diet are of interest to researchers with regards to sleep.”

She cites a recent study, which showed that two kiwifruits eaten one hour before bed, every night for four weeks, improved sleep onset, duration and efficiency in sleep-disturbed adults.

Tart cherry juice is another, which can be found in most health food stores. It was established that 30ml of concentrated cherry juice before breakfast and dinner for seven days served to increase melatonin content significantly.

“There were also significant improvements in sleep duration and sleep quality: an increase in total sleep time of 34 minutes,” says Walsh.

“Eating carbs has been shown to increase blood levels of tryptophan, needed in the production of the feel-good hormone serotonin, as well as the sleep hormone melatonin. This study compared the effect high and low GI carbohydrate-based meals, four hours before bed, had on sleep quality.

“A high GI meal, containing jasmine rice, was shown to reduce the time taken to go to sleep, when compared with the meal containing lower GI rice.”

According to US clinical psychologist Dr Michael Breus, a fellow of the American Academy of Sleep Medicine, some studies showed carbohydrate levels in the diet were “associated with changes to sleep behaviour”.

Breus says other research also found that increasing levels of tryptophan – an amino acid that boost sleepiness – from dietary protein sources improved the symptoms of insomnia.

“Dietary sources of tryptophan include many protein-rich foods, such as eggs, poultry, dairy, nuts, seeds and soybean,” Breus writes in his blog, thesleepdoctor.com/blog/.

However, as Breus warns, these results arose from a small group of studies, and “it’s not possible to draw hard conclusions from such limited research”.

“Most of the studies examined the acute effects of nutrition over sleep, effects that might transpire over a very short-term observation period. There’s little if any research that exists that tracks the longer term impact of dietary interventions for sleep.”