As there are not enough reference labs in Ireland, samples have to be sent to up to 11 locations in the UK 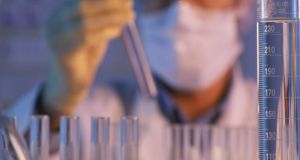 A central lab in Ireland would mean having the flexibility to reassign staff and resources to deal with problems when they become acute.

What happens to the samples you give in hospital? Patients are routinely asked to give samples of urine, sputum and blood. After a few hours, or sometimes a few weeks, you get the results. In the meantime, the bugs often go on a journey to different corners of Ireland or the UK. The samples are first tested by hospital laboratories but if a particular infection or disease is suspected, they are sent to reference labs that use more sophisticated equipment. These complete additional analysis including genetic testing.

Though a number of reference labs have been established here, Irish hospitals still post samples to 11 locations in the UK. The most recent version of the Public Health Laboratory’s Clinical Microbiology User Manual lists 115 reference lab tests. Just over 40 per cent of these tests can be completed here, and the rest are done in the UK.

“From a strategic point of view, it is clear that we need more reference capacity at a national level for different bugs,” says Dr Tony Holohan, the chief medical officer at the Department of Health. “We have many labs in the system so there’s a question about how we can reorganise our resources to ensure that we develop the national capacity that we need.”

Martin Cormican, professor of bacteriology at NUI Galway, is the director of two national reference laboratories in the university. He doesn’t think “one would reasonably expect a laboratory in the UK, which is there to primarily serve England, to drop everything if there’s a problem in an Irish hospital”. He says one advantage of having a national service is that their priority is to support the labs here. His labs conduct additional tests, help hospitals decide on the best treatment options for a patient, analyse outbreaks and provide data to policy makers.

“It was recognised at a national level by the HSE that it was necessary to have a process for confirming whether a [hospital] lab thought it had something that was a CPE,” says Cormican. Funding the CPE lab costs €70,000, which covers the salary of a scientist and consumables.

Meropenem is one of the best known antibiotics in this group. “Ten years ago, if someone was pretty ill and wasn’t getting better on the antibiotic you were using, you could count on meropenem. That was our reserve drug and you can’t count on it anymore because of CPEs.”

Though some samples can be complete in Ireland, most tests need to be conducted in the UK. Public Health England, Colindale, is one of 11 UK locations to which Irish samples are sent. Since January 2012, it has received 1,786 isolates of bacteria grown from Irish hospital samples. Colindale would not release how much it charges Irish hospitals for this service, citing commercial sensitivities. However, a microbiologist based in a Dublin hospital said it cost €190 for each isolate processed by Colindale. So it can be estimated this service from just one UK reference lab costs more than €140,000 every year.

One of the advantages of a central lab is that it has the flexibility to reassign staff and resources to deal with problems when they become acute. A review of clinical reference labs is being carried out by the HSE, according to Holohan, who added that a central reference laboratory is the “kind of thing that [might] emerge out of a review”.

One reference lab that didn’t wait for Government funding is the National Cystic Fibrosis (CF) Microbiology Reference Laboratory in Tallaght Hospital. Since 1999, this service has been funded by the charity Cystic Fibrosis Ireland and run by consultant microbiologist Prof Philip Murphy.

The need for this service arose when a particular strain of bacteria, called Burkholderia cepacia, “was spreading everywhere”, according to Murphy. “The real requirement for a reference laboratory is that you can’t distinguish those species in an ordinary conventional way.”

Since then, the lab has expanded its portfolio to include another type of bacteria, Pseudomonas aeruginosa, which is present in about 30 per cent of people with CF in Ireland. They receive about 1,000 samples from hospitals here each year which Murphy says saves the State about €250,000.

A 2009 report commissioned by the HSE on services for people with cystic fibrosis recommended that the HSE working group on reference laboratory facilities “should consider the need for a designated reference facility service for cystic fibrosis as a priority”.

The report also recommended that the service at Tallaght Hospital “should be supported” until the working group rules on the location of a designated reference facility service for cystic fibrosis. Despite applying for Government funding on many occasions, the CF reference lab continues to be funded by Cystic Fibrosis Ireland.

A resistant form of Pseudomonas aeruginosa was one of the bacteria included in one of the most recently published guidelines from the Health Protection Surveillance Centre. These guidelines for the prevention and control of particular forms of antibiotic resistance including CPEs and Pseudomonas aeruginosa, recommend that more national reference lab services are established for these bacteria. “The development of microbiology laboratory reference services specialised in the identification and more detailed characterisation of these organisms in Ireland is . . . an urgent requirement.”

One strain of bacteria that the guidelines apply to is vancomycin-resistant enterococci (VRE). Ireland has the highest incidence of VRE in Europe, yet lacks a reference lab service for it. Vulnerable people such as those on chemotherapy are at risk of getting infections that are difficult to treat if they pick up VRE, as commonly used antibiotics do not work on it. VRE caused 176 bloodstream infections last year, just 46 fewer than MRSA.

Since these guidelines were published in 2012, the CPE reference lab in Galway was established but many gaps remain in the overall Irish service. Labs in the UK continue to receive a steady stream of post from Irish hospitals.

In 2012 (latest European data), 44% of the gram-negative bacteria Enterococcus faecium isolates in Ireland were resistant to vancomycin. That is the highest percentage of resistance in the 30 European countries monitored by the European Centre for Disease Control. It is almost double the resistance of the next-highest country, Portugal (23.3%)