Singing the changes: the power of music on the mind 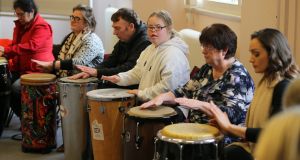 The power of music to soothe the mind and lift the spirits was in evidence at a special event in the National Concert Hall recently when 250 people from mental health day centres all over Ireland gathered for workshops and performances to mark the third anniversary of the Music in Mind programme.

These innovative choral singing and drumming workshops – run by the National Concert Hall (NCH) as part of its health and wellbeing programme – have encouraged people with depression and anxiety to socialise, learn a new skill and simply have fun together.

“We’ve had lovely feedback from participants about how their level of anxiety is reduced when playing or singing. We’re aware and humbled by the effort it took for everyone to get here today, particularly for those who find this challenging,” said Nigel Flegg, head of learning and participation at the NCH.

While many of those attending the celebration of Music in Mind had never been at the National Concert Hall before, there was a strong sense of camaraderie and acceptance of people’s different needs. “Some of the participants had never even been to Dublin before. What struck me most was how supportive of one another people were and how each group appreciated the performances. It lifted the spirits,” says Colleen Werle, project manager of Music in Mind.

Eimear Crehan is a facilitator at the Eve Larine day centre in Maynooth, Co Kildare. “You see a transformation of participants through the eight-week programme. A lot of them have no singing experience when they start and the focus is on personal development through creativity,” she explains. According to Crehan, singing quietens the mind, reduces anxiety and brings a stillness and presence for people. “It lifts the mood, improves confidence and gives people a connection to self, the group and the facilitator,” she adds.

Fiona Sweeney, a facilitator at the Rainbow Clubhouse in Ballyfermot and the Navan Mental Health Association, says participants practise the songs they sing in workshops during the week and some go on to join choirs and small bands afterwards. “Singing is about the group as much as the individual. It’s not often in our lives that we are all doing the same thing together,” says Sweeney.

Those who attended the NCH celebration in November also joined with other groups in singing, drumming and gamelan [Indonesian percussion instruments] workshops on the day. Dropping into these workshops, one could see a strong level of engagement mixed with a playfulness and pure enjoyment.

Oonagh McGinley is attending the event with the Céim Eile centre in Galway city. “Singing is good for the chest, throat and voice. Learning how to sing in harmony is a great challenge. It gives me a sense of optimism and positivity. It’s good for the soul,” says McGinley.

Maureen Bennett from Boyle, Co Roscommon, says she gained a lot of confidence doing the percussion workshop. “About three or four months ago, I wouldn’t have been able to come to Dublin and sit here. I was housebound but these workshops have given me a sense of relaxation and freedom,” she says.

Paul Hennessy, who is involved with the Melting Pot community space in Roscommon town, says he was apprehensive at first because he suffers from anxiety and depression. “I thought I wouldn’t be well enough to go to the workshops but I’ve met new people and there is a great sense of getting together where everyone is equal,” says Hennessy. Sean Cunningham, also from Roscommon, says quite simply: “It’s soothing for the head”.

Maria Pettison, from Lucan, Co Dublin, says she feels at ease with people at the Rainbow Clubhouse. “I suffer from bipolar [disorder]so I have good days and bad days but I feel myself again after I attend the club. There is a great buzz and the singing is uplifting.”

Flegg, who instigated the Music in Mind programme at the NCH with a pilot programme in 2015 in one mental health centre, says percussion and singing work well “because everyone can bang on a drum and everyone has a voice”. With philanthropic funding for three years from 2016-2019, the Music in Mind (who are running a donation campaign at nch.ie) was extended to 16 mental health day centres throughout Ireland.

“The three key aspects of the programme are that it is led by skilled and trained facilitators. It is recovery focused and people choose to sign up for it. And, personal evaluation at the beginning and the end of the programme shows a significant improvement in wellbeing over the eight weeks,” he says.

Not guilty by reason of insanity: Inside the Central Mental Hospital