Sing your heart out this Christmas – it’s good for you

Don’t worry about whether you can hold a tune, burst into song and feel great about it 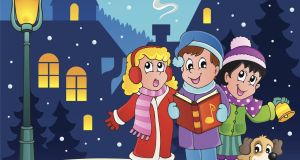 Psychologist Dr David Carey believes we should all make singing a part of our everyday lives. “I would encourage everyone to burst into song – make it loud, make it joyous or sad, but make sure you burst into song,” he says.

The Christmas holidays are a busy time for choirs and carol singers who are busy hitting all the right notes and not just for the benefit of the audience – it’s good for the singers too.

A recent study from Oxford Brookes University concluded that singing was the “most cost-effective way to improve people’s wellbeing” and that choir singing encouraged bonding in a group.

Previous studies have shown singing in a group could be a boost because breathing in synchrony triggers feel-good chemicals in the brain. It’s even thought to help strengthen the immune system and early studies show benefits for people with Alzheimer’s.

Dermot O’Callaghan, chief executive of the Association of Irish Choirs, says the benefits of singing are multifaceted. He encourages everyone, regardless of tone, to belt out a few lines whenever possible.

“Singing is good for mental, emotional and physical health,” he says. “Some of the obvious direct results of singing are elevated mood, improved memory and increased concentration. Stress and anxiety have also been proven to be significantly reduced after singing.

“All too often people have been told their singing voices are ‘not good’ or they may have developed that perception themselves. Obviously, like in all activities, some are more naturally gifted than others . . . but the benefits of singing are the same regardless of the level of accomplishment.”

The programme’s featured Cork choir is made up of care workers and people affected by homelessness, and Brophy says the impact it had on participants was startling.

“I have always believed in the power of singing and know that it is beneficial on both a physical and mental level,” he says. “But it also helps with mental health as oxytocin and endorphins are released which result in a relaxed and often euphoric lift to the singer’s mood – I have seen people change before my eyes when they lost themselves in song, they became lighter and more confident and even started to hold themselves and walk differently.”

“The choir doesn’t stop once the cameras have stopped rolling. Apart from a month off in the summer, they rehearse twice weekly for the year and many singers have told me they wouldn’t miss practice. It’s a place to come and socialise, they get a cup of tea and a sandwich and, more importantly, singing makes them feel great.”

“Singing, like all forms of music, bypasses the reasoning parts of the brain. These are the parts which cause us to overthink things, to fret or to worry . . . Sometimes it is just good to be alive and this is a good time to sing, or dance. Sometimes life is too much for us, so sing away the sadness. But it doesn’t matter what you sing, just sing and let your brain go away on a melody of harmony and rhythm. Soon enough you will feel the better for it.”