Tell me about it: Up until two years, he was a fun-loving, gregarious boy with lots of friends – now he has completely isolated himself and has started to fail in school 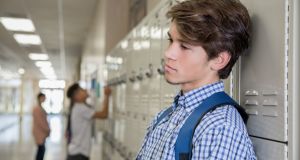 Being different in secondary school is a huge challenge and exclusion is one of our biggest fears – your son may feel at a fundamental level that his survival relies on no one discovering who he really is. Photograph: iStock

Question: I am married with three children. We have two grown-up daughters, who have left home and are now making a life of their own, and a 17-year-old son who we are both really worried about.

As a child and a young teenager he was boisterous, gregarious and generally great fun to be around. Up until two years ago he had lots of friends, both male and female, but since he turned 15 I cannot think of a single person that he has socialised with. I know he does communicate with some people on social media, but he hasn’t gone to a party or an event or met up with anyone in years.

1 Taoiseach says Government to weigh benefits of visitor restrictions when planning lockdown exit
2 BOI customers to be charged twice with bank fees on New Year’s Eve
3 Operator rejects claims by Dr Tony Holohan that car parks are full
4 Irish designer of Oxford vaccine : ‘I’ve never worked so hard in my life’
5 Somebody needs to explain sovereignty to Johnson before it is too late
6 Trump campaign parts ways with lawyer who made voter fraud claims
7 400 – yes, 400! – Irish retailers for all your online Christmas shopping
8 Covid-19: Level 5 restrictions likely to be eased in two stages, as planning to roll-out vaccine begins
9 The Offload: Ireland are stuck in no man’s land
10 I’m a Celebrity 2020 isn’t working. Get an Irish contestant – quick
11 Minister for Housing to ban new co-living developments
12 Covid-19 will worsen housing affordability, report warns
13 A Belgian city’s unintentionally phallic Christmas lights
14 Cyclist found with head injuries in Nenagh dies in hospital
15 Sinn Féin accused of ‘actively’ encouraging members to attend Storey funeral
16 Nicky English: Galway and Waterford face battles with fatigue in All-Ireland semis
17 Irish boss of Qantas says Covid vaccines will be mandatory
18 Jennifer O’Connell: Dryrobe culture wars a symbol of change
19 A stirfry at home as good as any restaurant could do
20 Chris Johns: I think we are on the cusp of an economic boom
21 St Columcille’s says 31 patients have tested positive for Covid-19
22 Netanyahu flies to Saudi Arabia for secret meeting with crown prince
23 Being polite in work emails is more important than ever
24 Anthony Hopkins: ‘I wanted to be famous. I wanted to be rich’
25 Patrick Quinn, co-founder of the Ice Bucket Challenge, dies aged 37
26 Una Mullally: Facebook experts at shrugging off culpability
27 Oxford Covid-19 vaccine can be 90% effective, results show
28 Face masks don’t impede exercise ... except for one type
29 Donna Hay’s no-fuss, no-stir green baked risotto
30 RTÉ must explain how event was organised, committee chair says
31 ESB urges court to find UCC has some liability for flood damage to buildings
32 Borrowing for pandemic rules out major public sector pay hike, Varadkar signals
33 Helena Bonham Carter: ‘People choose to sleep with powerful people. I got two children out of it’
34 The real Contagion virus is out there and it’s causing virologists to worry
35 Covid-19: University lecturers warn of ‘chaos’ if face-to-face teaching returns
36 Every kind of wind imaginable was against Tipperary football - and they came through
37 EU transport companies fear chaos through Britain on January 1st
38 Covid-19 vaccines: All we know so far and the challenges ahead
39 Family to raffle Irish designer home and raise money for charity
40 Jan Morris obituary: Celebrated writer of place and history
Real news has value SUBSCRIBE