Simon Thomas: ‘As a society we’re still pretty hopeless at talking about grief’ 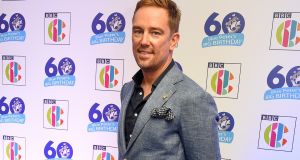 Former Blue Peter and Sky Sports presenter Simon Thomas, whose wife died in 2017. After her death, Thomas recorded his feelings on his blog, A Grief Shared. That in turn led him to write Love Interrupted. Photograph: Shirlaine Forrest/Getty Images

“At a quarter to six on a bright, cold November evening, after what had felt like the longest day of my life, my world fell apart.” That’s how former Blue Peter and Sky Sports presenter Simon Thomas describes losing Gemma, his wife of 12 years, less than a week after she was admitted to hospital in 2017.

She had been complaining of headaches in the preceding weeks and they eventually went to the doctor. On their second visit to a surgery in three days, they discussed the headaches, her increasing fatigue and the fact she was struggling to get out of bed. However, the doctor reassured them: “Having looked at your general wellbeing and your vital signs, I’m satisfied there is nothing seriously wrong with you. If things get worse over the weekend, come back on Monday.”

By Monday, her condition had deteriorated to the extent that they went straight to the emergency department, where she was diagnosed with cancer.

She had been suffering with acute myeloid leukaemia– a form of blood cancer in which the bone marrow makes abnormal myeloblasts (a type of white blood cell), red blood cells, or platelets. The doctor at Churchill Hospital in Oxford told Thomas how, in a healthy adult, the white blood cell count should be up to 10. In Gemma’s case, it was 450, “turning her blood into a thick sludge”.

She died that Friday, aged 40.

“What I’ve learned in the near two years since Gemma went is that, sadly, people don’t know enough about blood cancer and blood cancer symptoms,” says Thomas. “And I think because people aren’t aware of what to look out for . . . I think sometimes, which was definitely the case with Gemma, when you go to doctors you don’t impress on them that what you’re feeling. What I think was made more difficult for the doctor was Gemma was under an awful lot of stress with what has happening with me. She’d never seen me coming off work before because of mental health problems. He felt – and we did to an extent – that perhaps what she was going through was just the sheer stress of seeing me in the way that I was. But he didn’t pick up on it.

“This isn’t wanting to lynch doctors. They’re obviously under a lot of time pressure, money pressure. But people need to get blood tested earlier than they often are when it comes to blood cancer and, sadly for Gemma, it came too late.”

At the time, Thomas was struggling with severe depression and anxiety. He had dealt with depression a few years previously, following their unsuccessful attempts to have a brother or sister for their son, Ethan, through IVF.

Today I am crushed with indescribable pain. Just three days after falling ill with Acute Myloid Leukaemia, my dear wife Gemma passed away yesterday evening surrounded by her family and friends. If you are a prayer - pray for my boy Ethan. 8yrs, precious and in bits. Thank you.

In October 2017, “this horrible knotted anxiety feeling would affect me any time I tried to work, whether it was a very simple football debate show or a live game on the Saturday. It eventually culminated in having panic attacks. I had one on my last game which was Man United against Tottenham . . . Everything came crashing in and I had a panic attack in the disabled loo literally minutes before going on air. Sadly, that was the last time I did my job.”

Shortly after Gemma’s death, Thomas shared their story on Twitter and began recording his feelings and experiences on his blog, A Grief Shared. That in turn led him to write Love Interrupted, in which he describes how he attempted to put his world back together again.

The generosity of his friends and family shines through. It was 16 weeks before he and then eight-year-old Ethan spent a night alone in their house

He writes with disarming honesty and detail about how he navigated the days and weeks after Gemma’s death, about becoming a “solo parent” overnight and how it overwhelmed him. He turned to alcohol to numb the pain and by New Year’s Eve was “waiting to die, waiting for hypothermia to take me” on the grass outside his parents’ house. Through all this he questioned his Christian faith. “I absolutely wanted to know how God has allowed this to happen… and there have been times when, faith-wise, I’ve been holding on by one finger. [But] I knew that, without my faith, for me there is no hope.

“Ethan absolutely believes he’ll see Mum one day again in heaven. If I take faith out of the equation, for me or for him, that’s it: his mum’s gone he will never see her again. [My faith] has just given me the strength to carry on and to not give up.”

“I used to get a bit tired of people saying, ‘time is a great healer’. When it comes to grief, ultimately you can’t replace and bring back the person who’s gone, that’s why you’re grieving. But time is a changer. And it does change in a whole number of ways, in terms of how you cope with life, how you see life; in terms of how you value life, it changes.”

The generosity of his friends and family shines through. It was 16 weeks before he and then eight-year-old Ethan spent a night alone in their house. He stresses that such practical support is vital as “in the early days and weeks after you lose someone, all the things in life that were doable suddenly feel impossible. Like cooking. Putting a meal on the table at night for your boy. All those things are so difficult. There’s an awful lot of unwanted unpleasant admin after you lose someone – closing down of accounts, closing down of phone contracts, pensions, a whole host of things. If you’re good at that, go and help that person because they’ll almost certainly not be able to cope with it right now.”

There were also a number of random acts of kindness from strangers which “restored his faith in people”. People sent meal vouchers and presents to a cafe he is known to frequent. One man sent him a year’s worth of uplifting messages inspired by notes which Thomas prepares for his son to see at school if he needs a pick me up. The package had a message attached: “Even dads need snack notes.”

One of the main things Thomas was hoping to achieve with the book was to get people to “open up a bit more about grief”.

“I know as a society we’re still pretty hopeless at talking about grief. It’s such a bizarre thing. I understand in lots of ways we don’t want to think what ultimately is true for all of us, in that we’re all going to go at some point and we’re all going to lose loved ones. We hope that will be the natural order of life where our parents will go and we’ll go before our children. Of course, that’s what we all hope for. For the majority of people that’s how life turns out. [But] we’re still all going to face loss. Whether it comes when we expect it or not, it’s still very, very painful and it’s hard to deal with. And it’s going to ask questions that you as a person have never had asked of you before. It’s much better if we can be a bit more honest about what it feels like, of how best to support each other, how best to talk about it.”

Two years on, the 46-year-old says he is in a “such a different place”. He still has ambitions to return to broadcasting where Sky has left the door open for him. He has found a new relationship and he is an ambassador for a charity called Bloodwise, which has set up a fund in Gemma’s name “which is going to put money specifically into acute myeloid leukaemia and research and changing that statistic one day that only 15 per cent make it beyond five years”.

“I do feel a real sense of optimism and excitement about the future. It’s a different future to what we thought it was going to be. But sadly, for many, many people, they go through this as well. I always wanted to move forward. Not forget, but find life and embrace it.”

Love Interrupted: Navigating Grief One Day at a Time by Simon Thomas, is published by Trigger Publishing. All proceeds from book sales go to the Shaw Mind Foundation, a charity that focuses on mental health.