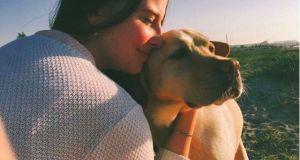 Gráinne Long and Buddy: her parents moved to Malmö and their house in Mayo was rented out. “My first thought was, what’s going to happen to the dog?”

When Gráinne Long moved from Mayo to Dublin for college, she assumed she would be returning to Westport some weekends, at Christmas and during the summer.

However last year, her university lecturer father was offered a position at Malmö University in Sweden, where her mother also quickly found work. Her parents moved to Malmö and their house in Mayo was rented out. Gráinne and her brother rent an apartment in Clontarf, along with their cousin.

“I try to visit them once a month, but it’s a bit different from the typical ‘going to visit your parents at the weekend’. I’m getting a plane,” says Gráinne.

The concept of “empty nest syndrome” is quite popular in modern culture. A child goes to college, or flees the nest, and the parent, or parents are left feeling lonely and empty. But in today’s society of extended and blended families, this is not necessarily always the case. In fact, on some occasions, quite the opposite can be the case, as it is for Long and many others.

The idea of the empty nest syndrome is familiar to Dr Seán O’Connell, a family psychologist, having seen it in many parents over the course of his career. “We’ve all heard of the term empty nest. Parents typically feel a sense of loss. It can impact on how they view themselves and can at times lead to not knowing what to do with their life.”

This sense of loss, can also be felt by children when there is a reversal of roles. When parents have moved home – house, county or even country – the children can find themselves at a loss, feeling unsure of their role. “Home is where the heart is, but if the house or location changes, does that mean you change also?” says Dr Seán O’Connell.

Anna Moran from Bray, Co Wicklow, is living in the house where she grew up with her mother and brother. However, she is now living there alone.

After living away at college in 2016, she returned to live at home last year – but her mother has moved to Co Down. “There’s this weird reverse guilt thing going on. I felt guilty because I was away, and now I feel weird because I’m back, and would it maybe have been easier not to come back. But obviously with college, especially living on campus, you can’t stay there forever, so I’m in this interesting situation where I left a family home and came back to a family home, but in a very different situation.

“At the moment, it’s a house that I live in with my two cats, which is a lot of effort when you’re only one person. It’s not really a home without your mum there.”

Kate O’Brien went through a similar situation. Having lived in Tullamore, Co Offaly, from the age of three, she moved to Dublin in 2013 to attend college, returning to the midlands at the weekends. But, in 2015, her parents moved to Wexford, where her father had a new job opportunity.

Kate did not take the news well at the time.

Looking back, she feels she overreacted. While their house in Tullamore was for sale, and she was studying for her college exams, she recalls arguments with her parents.

“It was probably the biggest fight we had. I blamed it all on needing to study for my exams, I said they were going to make me fail, it was a complete overreaction. I was so upset about it all. I found that really tough, but I think I was being selfish, and I can look back on it now and I think I upset them.”

Gráinne Long also recalls not quite knowing what to do when her parents informed her of their upcoming move, though she had different priorities.

“I didn’t believe them for ages! I thought it wasn’t true. My first thought was, what’s going to happen to the dog?”

While, initially, she was hesitant about her parents leaving the country, she knew it was the right decision for them. “I was shocked, but I knew it was such a good opportunity for the two of them, especially my dad who got offered a really nice job. Part of me thought ‘oh no, don’t go’, that selfish kind of reaction, but mostly I was delighted for them.”

Feeling anger, or slightly threatened in this situation is very normal, according to Dr O’Connell. “If we know that this place that we’ve known growing up is always going to be there, especially as kids, we almost assume that it’s permanent, our childhood home. Of course it’s going to be there, and of course our parents are always going to be there. But a lot of the reality for a lot of people is that that doesn’t happen, and it does change and it does go into flux. So when that is challenged, we say ‘hang on a second, what’s happening now? This can’t be true’, so it’s really about working on your threat system.”

But where is home now?

For Anna Moran, no matter where she lives, she will always say she is from Bray.

“Even when we sell that house, Bray will always be where I grew up, and I’ll always tell people I’m from Bray, and definitely from Wicklow.”

I love Tullamore, even though it’s not the brightest of towns

For now, Mayo is no longer her home, as her family aren’t there. “Malmö is home, home is wherever Mam and Dad are. But, in a way, home is also where I live with my brother and cousin as well – that’s a form of home. For me, home isn’t so much a place as it is a sense of family, and feeling secure.”

Kate O’Brien has taken a much more diplomatic approach to the question of where “home” is. “It’s definitely 50/50. I love Tullamore, even though it’s not the brightest of towns, and Wexford is a nicer town. Tullamore when I go back, I just get this feeling I can’t really describe – it’s where I grew up, but wherever my parents are is my home as well.

“So it’s very equal. If I had to pick one over the other it might just be Wexford, because my parents are there and they’ve made a very nice home for me there.”

2:50 Coronavirus: Myths that have gained traction

The shoe trends to step into this spring
2

Could a keto diet be bad for athletes’ bones?
Real news has value SUBSCRIBE