Rare genetic disorders: ‘We were told he was the only child in the world with this’ 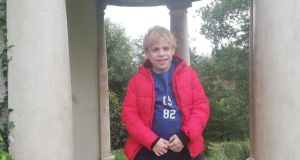 We all like to think that our children are unique but Nuala and Mick Crean were actually told by doctors that there was no one in the world like their son Charlie (13). They believed his genetic disorder was unique.

Charlie was smaller than his siblings when he was born in 2007 and the paediatrician noted his distinct facial features. He was the fourth child for the couple from Leixlip, Co Kildare, and they knew that something was different. Charlie needed physiotherapy to learn how to roll over and sit up, and there were concerns about his weight, height and overall development.

“We had a great paediatrician Prof Martin White [in The Coombe and Our Lady’s Children’s Hospital Crumlin] and he saw from the start that something wasn’t quite right,” Nuala recalls.

Charlie was admitted for tests on his heart, lungs and gastrointestinal system when he was one year old and everything came back clear. Anyone who watches a baby sleeping is familiar with their little startled movements when they hear a noise, but around this time Nuala noticed that Charlie was doing this when there was nothing to startle him. “Eventually we noticed he was doing it up to 20 times a day and we found out that these were mini seizures.”

Charlie was diagnosed with epilepsy and had one very frightening seizure when he was 14 months old. The family lives on the border of Kildare and Dublin, which caused a major delay in getting an ambulance. “They were arguing about whether the ambulance should come from Dublin or Kildare so the ambulance didn’t arrive for 45 minutes,” she says. “The funny thing afterwards was that his brother thought the seizure was caused by the stew we had for dinner and he has never eaten stew since that day.”

The seizure would not stop and he ended up on a ventilator in the ICU because his oxygen levels were so low. “We found out afterwards that in 20 per cent of cases like that, they die,” Nuala says. “As he got older, he had absence-type seizures where he was completely non-responsive, just staring into space.”

Genetic tests revealed that Charlie had a large deletion in his SMARCA2 gene, something neither parent had. “We were told he was the only child registered in the world with the deletion, though we later learned that there were other children with deletions in the same gene, although not exactly the same.”

By now, Charlie had been diagnosed with a moderate to severe intellectual disability. After four years in the local primary school, the learning gap was widening between him and his classmates and he moved to St Vincent’s Special School on the Navan Road. Nuala and Mick were beginning to accept they might never have a name for Charlie’s condition.

“We said to ourselves: this is Charlie, he’s unique,” Nuala says. “We were fairly easy-going as he grew up and didn’t put any boundaries on him. Some children with the condition are non-verbal. His speech was very delayed and we were told he might never talk so we started sign language. But then he started to talk and he hasn’t stopped since.”

Last August, Nuala and Mick finally got the news they had been waiting more than a decade for. “Crumlin had tested another child with a similar gene deletion to Charlie. That child had NCBRS and they had concluded that Charlie also had NCBRS.”

Like most people, they had never heard of NCBRS, or Nicolaides-Baraitser Syndrome. In 1993, paediatric neurologist Paola Nicolaides and clinical geneticist Michael Baraitser wrote a scientific paper about a patient called June and said her unusual combination of features could constitute a new syndrome. The syndrome has a long list of characteristics, including certain facial features, autistic-like behaviours, intellectual disability, epilepsy in about two thirds of cases, and scoliosis in less than a third of children.

“As soon as we got the name, we looked up everything we could find about it. We saw photographs of children with NCBRS and couldn’t believe the physical similarity with Charlie,” Nuala says.

It was a huge relief to finally have a name for Charlie’s syndrome. Now she is keen to raise awareness of NCBRS in case other families are seeking a diagnosis. “It was by chance that we found this out. Subsequently we found another child had been diagnosed two years previously in Crumlin,” Nuala says. “When I questioned why Charlie’s case hadn’t been flagged then, we found it was because of limited resources. Resources are concentrated on testing new cases, not reviewing existing ones. We were just lucky they connected the dots with Charlie.”

She says the delay in diagnosis made them less aware of what to expect and denied them the support of other parents in the same situation. “It also meant we couldn’t chase early interventions that proved very positive for others, such as early speech therapy. And we could have avoided other tests such as growth hormone levels, because small stature is part of the syndrome.”

After Charlie’s diagnosis, Nuala discovered the international NCBRS support group and is now on the board of the non-profit foundation and charity. Including the three Irish children, the support group has recorded 188 cases in 35 countries, aged from one to 47.

“We’ve learned so much from other parents. Charlie can read certain words but he can’t read a book. But through the group we heard of one 26-year-old who can read a newspaper. We learned that phonics don’t connect for people with NCBRS, but they can learn by sight recognition.”

The group is holding a global awareness day on October 9th and is raising funds to do research and make more clinicians aware of the syndrome (see ncbrs-worldwide-foundation.weebly.com for more information about the syndrome and ways to donate to help affected families). Because it is such a newly-recognised condition, life expectancy is unknown. Nuala says Charlie doesn’t have any life-limiting conditions. “I think he can have a relatively normal life - normal for Charlie, that is. The intellectual disability is the biggest thing affecting his day-to-day life.”

While some couple’s relationships have faltered in similar circumstances, she believes Charlie has brought the family closer together. “He is definitely the focal point of the home. The children are very protective of him and it’s made them more tolerant of different situations and better able to relate to other people,” she says.

“And it’s nice to see how well-known and loved he is in the community. Obviously there are challenges, but we wouldn’t change him for the world. Being smiley and cheerful is part of the syndrome and that’s certainly the case with Charlie.”

Parents of children with an undiagnosed genetic condition can now apply to avail of free genome sequencing if they attend Temple Street Children’s Hospital. Of the 230 families who have participated in the programme run with Genuity Science, 20 per cent have received a diagnosis. The programme is also re-analysing data over time in the hope that new research will provide a diagnosis. “This is a really good opportunity for parents like us who are waiting so long for a diagnosis,” Nuala Crean says.

Polyamory: The women in love with more than one person