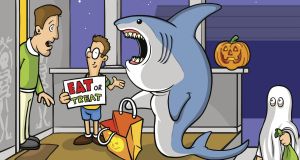 ‘I can’t wait until Halloween,’ came a little voice from the back of the car. Photograph: iStock

It’s still September and already I feel like the Grinch. Not just the Grinch who stole Christmas, but the Grinch who stole football matches, drama classes, modest birthday celebrations, planned visits to grandparents and even swimming lessons. In fact, I have become such a frequent bearer of bad news that I feel certain the children will soon put their fingers in their ears and sing la-la-la at the mere sight of me approaching.

I was in bad form leading up to the latest restrictions announcement. We’re incredibly lucky. We’re all healthy, well and safe and there are plenty of us to keep each other company – to the point we, as a family, exceed the number allowed to visit another household. It wasn’t unexpected and yet I found myself sad again that those tiny semblances of normality that made such a difference to my children’s lives, and mine, were gone again for a period. Sad that we had to take a step backwards. As Dublin came under lockdown, we were to be cut off from my parents again who had only recently come out of lockdown in Kildare themselves.

Still, my job is to keep the children’s chins up and so I did so in a way I’d tried to consciously avoid before coronavirus arrived on our shores – I abandoned all plans to live in the now and looked to the future instead.

“It’s only a few weeks,” I said to those old enough to realise things were changing again and whose immediate and near future plans were impacted. “It’ll be grand,” I said before reminding them (and me) of how lucky we are. And they nodded and got on with it because children and teenagers are simply amazing, accepting whatever is asked of them to keep everyone safe.

I hope this will be remembered when we come out the other side. That we don’t just dismiss their efforts and sacrifices with the usual sweeping “children are resilient” platitude that serves as a comfort blanket to us grown-ups. We owe them more than that.

I’m trying to find a focal point in the future to aim towards, but it’s difficult to make plans when nothing is certain. Abandoning living in the now is not as easy as I’d thought, when the now is all we know for sure.

The kids aren’t having the same problems. “I can’t wait until Halloween,” came a little voice from the back of the car. The conversation had started earlier in the day about costumes and decorations and whether it was really too soon to put them up. The welcome distraction from the meh-ness of the weekend meant that I was only too happy to dwell on it.

“We should go and look at some decorations in the shops soon,” I suggested, keen to keep the excitement going and happy for them to have something to look forward to. And so, as tends to happen with kids, my vague suggestion of a plan at some obscure unconfirmed time in the future was deemed to have been written in stone and committed to that very evening.

It never gets old – looking at their faces as they look at the lights and costumes and gimmicky decorations. One was certain he’d found the perfect mask so we made our purchases and headed home.

“I got my mask,” he roared as he ran in the front door. “It’s not a coronavirus one. It’s a Halloween one,” he bellowed as those at home came out to investigate. I found myself laughing at the surreal and newfound need for distinction.

“Oh I can’t wait to go trick or treating,” the youngest said, caught up in the excitement of it all. The Halloween Grinch within me flinched knowing Halloween was likely to look different too. I didn’t want to be the bearer of bad news again. An older sibling saved me the job by voicing his concerns that trick or treating might not even be possible. His younger brother was crestfallen.

“We’ll make the best of it,” I promised. “Whatever happens, we’ll have a great day.”

Unperturbed, the conversation changed to Christmas. “I’m getting a basking shark” for Christmas, the second youngest announced. “I’m going to write it on my Santa list,” he continued, certain this would seal the deal.

His younger brother eyed him up suspiciously. “Well I’m getting a great white,” he replied, never one to be outdone.

“Santa only brings things mammies and daddies allow” a wiser sibling, familiar with the rules, declared, looking to me for verification.

But I’d had enough of being the spoilsport. Father Christmas can break the news on this one. And coronavirus can take the hit.