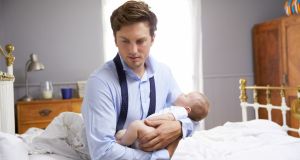 “Depressed fathers tend to play and engage less with their children and talk more negatively about and to them,” according to the UK’s National Childbirth Trust.

When a father shows little interest in a new baby, others are likely to be critical. However, it is increasingly recognised that men as well as women can suffer from postnatal depression. And absence of interest is one form depression can take.

In the UK, the NHS last year announced that it will offer mental health screening to the partners of new mothers who themselves are depressed. Nonetheless, postnatal depression is seen very much as an issue for mothers and can easily go unrecognised in men.

It doesn’t help that, according to the UK’s National Childbirth Trust (NCT), the peak time for postnatal depression in men is three to six months after the birth. If the depression came immediately after, it would be a lot more noticeable, but the time lapse may mask what’s going on.

We don’t quite know why men suffer from postnatal depression, but then it seems to me that we know relatively little about depression and its causes anyway. Like women, men undergo hormonal changes following the birth of a child including, for instance, lower levels of testosterone. That might have something to do with it. Other factors that have been identified include having a history of depression and anxiety, having a low income and not being in a relationship with the child’s mother, according to the NCT.

I found the last one interesting because it cuts across stereotypes about absent fathers not caring about their children. For most, I would think, the birth of your child to someone they’re not in a relationship with must bring a deep sense of separation.

It may also be that anxiety over the challenge of parenthood and of contributing to the support of partner and child contributes to postnatal depression. Having a partner who herself is depressed is also a risk factor. First-time fathers are more vulnerable than other fathers to becoming depressed. Fathers can feel left out if the mother turns all her attention to the child.

And all of this at a time when everyone expects you to be over the moon.

Some recent British research has suggested that the daughters of men with postnatal depression may be more susceptible to becoming depressed themselves as teenagers. I wonder if this is more likely to happen if the father has depression on and off during her childhood? And why daughters rather than sons? We don’t know.

Symptoms of postnatal depression, according to the NCT, can include hopelessness, withdrawal from family life, frustration, conflict, violence, a negative attitude towards the child, excessive drinking, drug use, insomnia, indigestion and other physical symptoms.

“Depressed fathers tend to play and engage less with their children and talk more negatively about and to them. They are less likely to sing and read to their children, and more likely to discipline them harshly,” says the NCT.

That postnatal depression in the father can also lead to emotional problems in their children is understandable, given that list of symptoms. Moreover children need to bounce off their parents emotionally and if a parent is withdrawn that option is closed off for at least part of the time.

If a father or someone close to him suspects that he is suffering postnatal depression, he would be wise to go to his GP to talk about it. He might also consider counselling. At the very least it is something to discuss with one’s partner or friend and also to read about. The NHS has a simple screening tool that is linked to http://bit.ly/nctpostnatal – the trust’s page about postnatal depression.

Depression is a rotten experience and it can also be hard on those who surround the affected person. For that reason it is all to the good that this issue of postnatal depression among fathers is at last being recognised.