Where is the vaccine against anti-vaxxers?

Again and again, assertion there’s a link between MMR vaccine and autism has been debunked 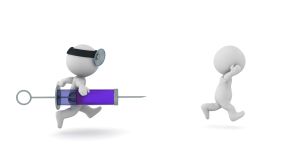 How many studies do you have to throw at the vaccine hysterics before they quit? How much of a scientific consensus, how many unimpeachable experts and how exquisitely rational an argument must you present?

That’s a trick question, of course.

There’s no magic number. There’s no number, period. And that’s because the anti-vaccine crowd (or anti-vaxxers) aren’t trafficking in anything as concrete, mundane and quaint as facts. They’re not really engaged in a debate about medicine. They’re immersed in a world of conspiracies, in the dark shadows where no data can be trusted, nothing is what it seems and those who buy the party line are pitiable sheep.

And, boy, are they living at the right time, when so much information and misinformation swirl by so quickly that it’s easy to confuse the two and even easier to grab hold and convince yourself of whatever it is you prefer to believe. With Google searches, you find the ostensible proof you seek. On social media, you bask in all the affirmation you could possibly want.

The parents who are worried or sure about grave risks from vaccines reflect a broader horror that has flickered or flared in everything from the birther movement to “Pizzagate,” that nonsense about children as Democratic sex slaves in the imagined basement of a Washington pizza joint. Their recklessness and the attendant re-emergence of measles aren’t just a public health crisis. They’re a public sanity one, emblematic of too many people’s wilful disregard of evidence, proud suspicion of expertise and estrangement from reason.

Again and again, until blue in the face, medical authorities have debunked the renegade assertion that there’s a link between the MMR vaccine, so named because it inoculates against measles, mumps and rubella, and autism. On Tuesday, a group of Danish researchers who looked at more than 650,000 children over 10 years announced that they had found no such association.

Again and again, until out of breath, those same medical authorities have also explained why making sure that all or nearly all children are vaccinated is so crucial: It creates a critical mass of resistance, known as herd immunity, that doesn’t give a disease the chance to spread.

Nonetheless, enough parents plug their ears that the World Health Organisation lists “vaccine hesitancy” – a euphemism if ever I heard one – among 10 global health threats in 2019.

They choose their own alternative facts. Take Darla Shine, wife of Bill Shine, who just announced his resignation as White House communications director. Last month, amid alarms about new cases of measles, she took to Twitter with the cockamamie claim that not being vaccinated and coming down with measles or mumps was a big-picture plus, a hardiness builder that could help a person fight cancer down the line. “I had the #Measles #Mumps #Chickenpox as a child and so did every kid I knew,” she tweeted, adding that her own kids were, regrettably, vaccinated. “They will never have the lifelong natural immunity I have. Come breathe on me!”

Thanks but no thanks. I suspect my breath is better spent elsewhere.

Anti-vaxxers run the political gamut. They’re on the left and the right.

Paranoia has no partisan affiliation.

I should also add that alternative facts had currency long before Kellyanne Conway christened them such and that junk science, nutty hypotheses and showy apostasies have been around forever. Humans aren’t rationalists. We’re romantics, and the world is wondrous when you believe that you belong to some brave and special tribe and have experienced enlightenment – about the assassination of John F Kennedy, about the existence of extraterrestrials, about the 9/11 attack on the World Trade Center, about vaccines – that all the less perceptive, more gullible conformists out there simply can’t comprehend.

But there are differences now that make the cranks that much more baffling, numerous and pernicious. For starters, they fly ever more stubbornly in the face of sophisticated research and hard-earned knowledge. Beneficiaries of wisdom that prior generations lacked, they toss it away, wasting and mocking progress itself.

At the same time, in many educational circles, there’s as much talk of students’ individual truths as of the truth. Joan Donovan, director of the Technology and Social Change Research Project at Harvard’s Shorenstein Center, said that social science and history courses increasingly emphasise that truth is situational and that “very few things are always true all the time”. That healthy scepticism can turn unhealthy when it leads to the rejection of incontestable realities. There’s “a crisis of authority, a crisis of expertise,” Donovan told me.

Last week president of the National Association of General Practitioners in Ireland, Dr Maitiú Ó Tuathail, said the proposed online safety commissioner should pursue anti-vaccination campaigns, saying that they were directly responsible for an upsurge in measles in north county Dublin. “There’s an outbreak of measles in north county Dublin, and that is only because the uptake of the MMR vaccine is much lower than it should be, and that is as a result of misinformation on social media,” he said.

The internet turbocharges everything.

“I don’t want to say it’s the only force, because there was Holocaust denialism before the internet – there was even AIDS denialism before the internet – but it’s an enormous, enormous force: the most effective echo chamber in the history of mankind,” said Michael Specter, a staff writer for The New Yorker who is the author of the 2009 book “Denialism,” about irrational thinking. He added, “It’s very difficult for people, no matter how well educated they are, to parse what’s the wheat and what’s the chaff on the internet.”

For example, anti-vaccine propaganda – some of which was spread by Russian trolls and bots as part of their sowing of discord before the 2016 election – can look as official and trustworthy as legitimate information. “And as websites get better and Twitter becomes something that people not only look at but rely on, it’s very difficult to get away from falsehoods and conspiracies,” Specter said. “We’re living in a world where facts are just another element of your decision-making process.”

One of the best explanations of that came in a 2016 essay in The Times Magazine by Jonathan Mahler, who noted “a radical new relationship between citizen and truth”. He wrote that millions of people “are abandoning traditional sources of information, from the government to the institutional media, in favour of a DIY approach to fact-finding”.

They turn to the internet, which is both a hall of mirrors and an overstuffed bazaar. It lets them customize their input and thus tailor their reality, which is reinforced by the like-minded company they keep online. They become surer that climate change is a hoax, that the deep state plots against the bold warriors who threaten it, that a fake Melania Trump is sometimes used as a substitute for the actual one.

And they open the floodgates to so much fiction that fact is swept away.

Where’s the vaccine against that?