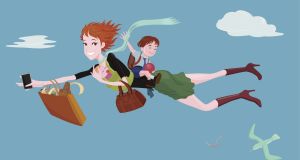 Having it all, shouldn’t involve sacrifice after sacrifice and families feeling the pressure they feel.

“We’ve been sold a pup” my friend sighed as we chatted about the usual struggle to juggle mayhem and the about to lose your mind-ness that comes with “having it all”.

“I should have listened to my mum” she continued, describing how her mother had tried to gently point out the benefits of a particular career direction, should she choose to have a family further down the line. “But sure, you know yourself . . .” she trailed off.

Having children, should I be lucky enough, was always part of my great life plan from a very young age. Even having such a large family was part of the dream. But so was having a career and working outside the home – though I never gave much thought to how I might combine both.

All I was certain of, was that I’d manage. After all, others did, allegedly. There were super-mums everywhere apparently, breaking glass ceilings, keeping beautiful homes, raising perfectly behaved tri-lingual children, sitting on the school parents’ associations and turning up at the school cake sale with the most perfectly formed homemade character cakes.

Then in the evenings, in the interest of positive work/life balance and continued limberness, they took yoga and pilates and practiced mindfulness – because mum matters too.

The only potential hiccup I was facing was that domesticity and I are regularly at loggerheads.

And so it came to pass that motherhood came knocking and I was about to have it all – a job I enjoyed, a beautiful child and a Nissan Micra. A little tweaking to my PC (pre-children) ideals and we were good to go. I had a childminder and a long commute.

The hours were set and I could just about fit it all in, as long as I lifted my baby daughter from her cot at 6am and left for the childminder’s half an hour later. It was a manageable feat, but only thanks to my work’s family-friendly policies. I would get to know them a lot better over the coming years.

As more children came to join the mayhem, the tweaking continued and a house move ensued. Now, surely that we were living in the same county as we both worked, things would be easier.

But on I toddled juggling crèche and school runs, work and three different afternoon pick up times. Managing homework battles and navigating after school activities and generally running myself ragged, having it all.

That’s not to say that himself didn’t pull his weight. He always has and he always does. And in spite of the bad press dads often get when it comes to sharing the home load, most of the dads I know are fabulously hands on - when they’re there. And therein lies the difficulty.

I’m often frustrated when I see the tunnel visioned approach to the childcare crisis. The cost of childcare is outrageous and for many well exceeds the average figure cited. Yet cost is not the only factor that families need to consider nor the only issue that needs tackling. And it’s certainly not the only pressure that supermums feel.

Too often the focus when it comes to childcare needs and provision, is solely on younger children - babies, toddlers and pre-schoolers. It’s as if school attendance, somehow removes the need for childcare, instead of posing a very different logistical nightmare. Later starts than crèches. School holidays that babies and toddlers were oblivious to. Parent teacher meetings, in-service days, school shows, activity involvement, and the inevitable sick days, usually taking down families in staggered sequence for maximum annual leave obliteration, all create their own headache. And not all of us have family support as we try to juggle the juggle and cope with meltdown moments.

We need a focus on family-friendly policies that can truly be availed of without the fear of negative career impact - in theory or practice. We need policies that better support mums returning to work, such as breastfeeding break entitlements that don’t expire before the maternity leave does. And we need policies that are flexible to the ever changing needs of parents and that are availed of by both mums and dads. We need to support individual family choices and respect the role of carer. And we need a shift in attitudes.

We need to redefine having it all.

Because supermums know there’s a fast one being pulled.