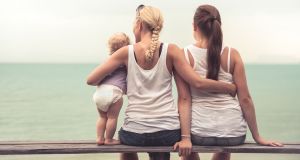 As the marriage equality vote draws toward its close, a comprehensive study published in the Medical Journal of Australia shows children raised in same-sex-parented families do as well as children raised by heterosexual couple parents.

The review of three decades of peer-reviewed research by Melbourne Children’s (sic) found children raised in same-sex-parented families did as well emotionally, socially and educationally as their peers.

The study’s findings will undercut one of the arguments that have been used by the No campaign in Australia – that children need both a mother and a father to flourish.

The study’s authors said their work aimed to put an end to the misinformation about children of same-sex couples and pointed out that the results had been replicated across independent studies in Australia and internationally.

Titled The Kids are OK: it is Discrimination Not Same-Sex Parents that Harms Children, the report comes as the postal survey voting period enters its final days.

Votes must be received by the Australian Bureau of Statistics by November 7th and outcome will be announced on November 15th. So far polling has indicated that the Yes campaign is headed for a convincing win.

No evidence of harm

Among the studies reviewed were the 2017 public policy research portal at Columbia Law School, which reviewed 79 studies investigating the wellbeing of children raised by gay or lesbian parents; a 2014 American Sociological Association review of more than 40 studies, which concluded that children raised by same-sex couples fared as well as other children across a number of wellbeing measures; and the Australian Institute of Family Studies’ 2013 review of the Australian and international research, which showed there was no evidence of harm.

“The findings of these reviews reflect a broader consensus within the fields of family studies and psychology. It is family processes – parenting quality, parental wellbeing, the quality of and satisfaction with relationships within the family) – rather than family structures that make a more meaningful difference to children’s wellbeing and positive development,” the researchers said.

The researchers said that studies reporting poor outcomes had been widely criticised for their methodological limitations. For example, the widely quoted Regnerus study compared adults raised by a gay or lesbian parent in any family configuration with adults who were raised in stable, heterosexual, two-parent family environments, which may have distorted the outcomes.

However, the study did find that young people who expressed diversity in their sexual orientation or gender identity experienced some of the highest rates of psychological distress in Australia, said the study’s senior author, Prof Frank Oberklaid.

“Young LGBTIQ+ people are much more likely to experience poor mental health, self-harm and suicide than other young people,” he said.

“Sadly, this is largely attributed to the harassment, stigma and discrimination they and other LGBTIQ+ individuals and communities face in our society,” Oberklaid said.

He warned that the debate itself had been harmful.

He said there was solid evidence in countries that had legalised same-sex marriage that it had a positive impact on the mental health and wellbeing of same-sex-parented families and LGBTIQ+ young people.

“As part of the medical community we feel a duty of care to all groups in our society, particularly to those who are vulnerable. Our duty extends to making sure that accurate, objective interpretations of the best available evidence are available and inaccuracies are corrected in an effort to reduce the destructiveness of public debate,” Oberklaid said.

He called for an end to the negative messages that could harm children in the final weeks of the voting period.