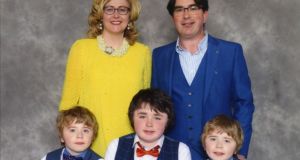 Paula and Pádraic Naughton and the three boys: “They are totally incredible and never, ever complain about anything,” says Paula.

“I am not sure anyone really copes with being told that all of your children are terminally ill and that there is no treatment,” Paula Naughton, mother of Archie, George and Isaac, says about hearing the news that her three sons had the genetic condition Duchenne muscular dystrophy.

“Being told your child is going to die prematurely is horrific. Being told that there is no treatment or cure adds to that pain, but waiting for it to happen, and knowing that it can happen at any time, is crushing.

“Duchenne has stolen so much joy and we grieve the life we had anticipated for our sons. The joy we experience now comes only from being present with Archie, George and Isaac.”

Their muscles become weaker every day

The condition has left Paula’s three sons paralysed. “They can no longer stand or walk. Their muscles become weaker every day. All the things we take for granted are a struggle for them and as the weeks pass they just become weaker and weaker.

“They are totally incredible and never, ever complain about anything,” Paula says of her sons. “They are very close to each other and supportive of one another’s endeavours. George and Isaac are identical twins and very, very close to each other. Archie is really missing his peers, but the boys’ respiratory function is not great, so they need to be at home at present. Archie is really, really missing his wheelchair basketball too.

“Obviously Covid-19 has not helped them at all. They are being home-schooled and space is very limited for them in the house.”

The Join our Boys trust was set up by Paula and her husband Padraic to raise money to provide the boys with the resources they need, to raise awareness of Duchenne, and to raise funds for gene therapy programmes. The trust commenced building an accessible house, which the family will borrow. It is hoped that money raised from the book, United We Play, written by Faye Hayden will go towards fitting out the house.

“The book is about teaching children and their grown-ups about inclusion,” Faye explains. “The particular section of diversity is disabilities, but the whole premise of the book is ‘although we may look different, we’re all really just the same’. Play doesn’t discriminate, it unites us as children and as adults. The book focuses on that.”

Paula and Faye became friends through social media, finally meeting each other in person at the No Limits conference in Croke Park in 2019. Both feel passionately about the need to need to address inclusion.

Paula and her husband both work in the area of mental health. “We have spent our careers advocating for inclusion for people recovering from mental illness,” she explains. “I don’t think that people consciously mean to exclude others, but they often do. I think we need to start this conversation with children as early as possible to educate them that we are all different; that is the beauty of life. However we need to understand that people that experience major challenges in life, in relation to sickness, physical or intellectual disability are exactly the same as everyone else.

“While some things are improving, as a society we could do so much better. At times things are planned to be ‘inclusive’, but they are often tokenistic attempts, often to tick a box. That has been our experience.

“Our children have been very fortunate in that they are/were very well supported in national school. I do think it gets a bit more tricky in secondary school though. As the children become more immobile, life becomes harder. Most schools are not set up to support adolescents in an inclusive way and we have found we have had to advocate a lot for Archie to make sure he gets the same opportunities as his peers. Often, once you have the conversation people are very reasonable and realise that there are solutions.

“I think sports clubs need to do more to include children with additional needs as a matter of course,” she continues. “Archie has experienced exclusion in relation to some sports. The local rugby club in Creggs has been fantastic and Archie is training to be a rugby coach. He is also an assisted runner and has completed three Dublin City Marathons. He also plays wheelchair rugby.”

Mother-of-three Faye previously worked with Foróige and ran a summer camp for autistic teens. “They were amazing and I became involved with their youth club. Their youth club evolved into two youth clubs and an adult social group. The stories the young people told me about the way they had been treated and excluded was very upsetting and I take every opportunity to promote inclusion now.”

Faye’s own son Patrick is autistic and has ADHD (attention deficit hyperactivity disorder) and ODD (oppositional defiance disorder). “As a family, we have had a very challenging few years in terms of accessing the support Patrick needs.

“He was nine when he was diagnosed and throughout his life he has been excluded in different ways, often subtle ways, that people don’t even realise they are doing, but it is hurtful and damaging to a person’s sense of self-worth, and it is something I feel we all need to pay more conscious attention to.

“A mum called me earlier this year with a plan of how Patrick could be included, with contingency plans and everything for her son’s birthday party. I put the phone down and cried happy and relieved tears, because the mum simply took in her stride that Patrick had different needs and that required a bit of extra effort that she was happy to make that. Knowing people value your child in the same way you do is priceless.

“Patrick like many autistic people suffers great remorse if his behaviour has been challenging to others – although his behaviour is always because he is challenged with coping in the world around him.