‘Outside the operating theatre, I burst into tears’ 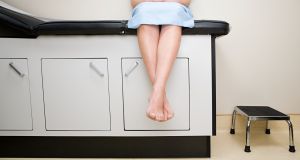 Even the most minor of procedures can require mental preparation too. Photograph: iStock

“Will I get your mam?” asked the nurse.

“She’s not here,” I spluttered in between tears, “she had to get back to our shop to work.”

Those lines are from my diary, written when I was 13 years of age. I had just been admitted to hospital with a threatened burst appendix and was about to be operated on to have it removed. My 13-year-old self writes: “When I’m brought to the room outside the operating theatre, I suddenly become very frightened and burst into tears. The nurse tries to console me. I’m given something to calm me down and a short time later, all I remember is being wheeled into the operating theatre where I comment on the great view of the Rock of Cashel out the window and then I fall into a deep sleep. I wake up in the recovery room, calling once again for my mother and, thankfully, this time she’s there.”

I loved my mother but as an adult and now as a parent of two small children, I look back on that episode of my life and wonder what she was thinking, leaving her youngest daughter on her own at such a vulnerable and frightening time for a child. I know there was no malice in my mother’s actions, but, to this day, there remains an irrational fear within me that bubbles to the surface every time I must undergo a medical procedure.

Couple this with the fact that, at 17, I finally admitted out loud that I had been molested. My earliest memory was of an incident when I was just six years old and my last memory relates to another inappropriate encounter when I was 10 years old. I recently re-read all my diaries from my childhood. Never once did I reference anything untoward happening to me. I was in denial even to myself until 17 years of age, when a close friend confided in me that she had been abused. My own secret reality suddenly broke through the Pandora’s box that had contained it for many years. Thanks to regular counselling, a supportive husband, family, friends and work colleagues, I generally function as a happy adult day-to-day who tries to make the most out of my life.

Every now and then though, a curve ball is thrown my way which once again challenges my mostly healthy mental state.

Recently, I spent two nights in St James’s Hospital in Dublin for an innovative, minimally invasive minor procedure called fibroid embolisation. An ultrasound a few months ago had revealed I had several fibroids, but one was causing problems due to its positioning and the fact that it measured larger than my entire uterus.

I had three options: (1) medication for the rest of my life; (2) the aforementioned procedure; or (3) a hysterectomy.

I did my research and all roads pointed to Dr McEniff, who is an expert in this specialised field. I emailed the address on the website of St James’s Hospital and was pleasantly surprised when he personally responded to me within a couple of hours. We set up an appointment for a few weeks later, at which point he discussed the three options with me. We agreed I was too young for options (1) and (3), so we opted to go ahead with the fibroid embolisation. The procedure involves the interventional radiologist inserting a catheter through my groin, manoeuvring it through the uterine artery and then injecting an embolic agent into the arteries which supplies blood to the uterus and the fibroids. The fibroids then gradually shrink.

Ahead of the procedure, I had to undergo an MRI at Dr McEniff’s clinic at the Beacon, to rule out the possibility that any of the fibroids were cancerous. I had never undergone an MRI before, but I knew what it involved so I was terrified. Since my childhood, I have experienced a crippling fear whenever I must hand over control of my body to others, even if they are professionals trying to help me.

Today FM’s Dermot and Dave were welcome company that morning

Also, as a person who operates at a fast pace on every level, at home and at work, being told I had to lie completely still for 20 minutes was seriously challenging. A close friend provided me with an essential, practical tip. She advised me to ask them could I listen to an FM radio station of my choice while undergoing the MRI. Today FM’s Dermot and Dave were welcome company that morning and unbeknownst to them, they helped greatly in easing my anxiety. Immediately afterward, Dr McEniff gave me the positive results needed to proceed so we scheduled my appointment for the fibroid embolisation the following month.

Coincidentally, the procedure was scheduled to take place on November 6th, which was exactly six years to the day since my mother had passed away. After dementia had taken hold of her mental state a few years previously, my mother physically left us on November 6th, 2012.

On the morning of the procedure, I was anxious.

My mind was flipping between thinking about my mother’s death and that memory of my 13-year-old self, terrified ahead of my first operation. Added to this, the nurse couldn’t find a vein to insert the IV line. After failed attempts on both arms and sensing my ever-increasing anxiety, she called on a trained phlebotomist to take over, who eventually managed to get an incision into one of the veins in my hands.

At this stage, I couldn’t cope with all the poking and dragging; a panic attack ensued. My palms got sweaty, my breathing quickened, and I started crying uncontrollably. I tried to take big breaths like I had been taught many times before, but by this stage my body wouldn’t listen to my rational requests. For a second, I contemplated cancelling it all and running away from the stifling experience. The nurse had to get the doctor to prescribe Xanax for me and I eventually calmed down . . . for a time.

As I was wheeled into the operating theatre room with various friendly staff all in their scrubs ready to attend to me, I was once again overwhelmed. I was 13 again and feeling very alone. It also suddenly struck me that my two previous, most recent visits to the operating theatre had been to give birth by C-section to our daughter in 2010 and then to our son in 2014. For each of those occasions, my husband had been there, holding my hand every step of the way, understanding the trauma I was experiencing and how invasive it felt for me. This time, however, I was on my own, surrounded by strangers and intimidating radiological devices.

While I battled hard to keep my composure, my emotions couldn’t hold back any longer and I was so disappointed in myself as I felt warm tears trickle down my face. The medical team sensitively acknowledged my anxiety and subtly took swift measures to ensure I remained calm for the remainder of the procedure. Afterward, the soreness was managed via a personal morphine pump, so I slept well that night.

The next morning, I had another unexpected internal battle with myself as I endured being washed down by a wonderful healthcare assistant. She had no idea that because of my own personal history, every touch on my private parts with the wet wipes, exposed my raw vulnerability, making me wince and well up.

But I didn’t cry this time.

I told myself repeatedly she was just trying to help me feel better.

And in the end, she did.

When Dr McEniff came around to check on me later that morning, he described the procedure as having been “textbook”.

I was pleased and relieved. While the healthcare team was outstanding, I learned a valuable lesson that even the most minor of procedures can require mental preparation too. I had completely played down the significance of this operation, so I was blindsided by so many incidents which brought about anxiety on my part over the short two-day hospital stay.

I’ll better prepare next time, but hopefully that “next time” will be in the very distant future.