Openly acknowledging my poor eating and fitness habits was empowering 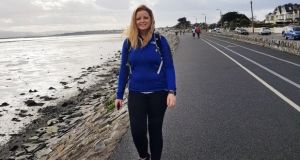 Rachel Flaherty: It’s been two weeks since I stepped on the scales and decided to cut back on the sugary snacks, reduce portion sizes of my meals and try different types of exercise

I didn’t need any weighing scales to tell me I’d gained weight – 1st (6kg). My belt and clothes had dutifully informed me of that.

For a moment I wondered would giving the scales a quick kick while telling it how evil it is make me feel better? No, shooting the messenger would not help. It was just another measurement instrument and, like the measuring tape I had flung on the floor minutes earlier, was not conspiring to tell me lies.

My injured right foot was the destroyer of all my goals, plans and progress I’d made.

I scowled down at my foot, still bandaged and looking back at me smugly after two months of demanding my attention every day.

I apologetically picked up the tape, nudged the scales gently back under the press and let out a long, exasperated sigh while collapsing on to the couch.

Looking back now I’m glad it happened as it was a lesson I needed to learn from. I needed to take time to figure out new strategies to cope with setbacks in life as that will matter most long term for my future health and well-being.

A few weeks ago the injury signals started to appear to remind me to prioritise looking after my health again, and I’d mostly ignored them. I’ve significantly changed my relationship with my body, mind and food over the last two years and lost more than 3st 7lb (22kg).

I have spent the time since ingraining healthier habits into my daily routine so they became automatic. Over months, step by step, I introduced healthier behaviours to replace my many bad habits, which included skipping meals, binge-eating, treating exercise as punishment for eating to excess and restrictive fad diets. Progress was gradual but the results were long lasting and, surprisingly, it all became more enjoyable as the weeks passed.

The “old me” would have avoided the reality of my current weight gain for many more months, and not spoken about it. It has taken time but realising that although I’m confident and happy in most areas of my life, openly acknowledging my poor eating and fitness habits was empowering.

In terms of problems people have, especially ones that are out of their control, its minute, and I was too embarrassed to admit it bothered me for some time. But it did bother me. I had started to notice small health implications, and then started to fear future ones as my unhealthy habits continued to grow. I also missed feeling energetic and physically strong. But when I eventually did admit it, I immediately felt lighter, both physically and mentally, and thoughts of weight loss and fitness “failures” started to fade. I could see with some patience I could change what I then considered weaknesses into strengths.

Not everyone has that choice and I was grateful that I did as through the years I’ve seen there are a myriad of complex reasons people gain or lose weight from illness and medications to genetics, and many others in between.

Tracking my habits helped me see what small changes I could make and it was a relief to feel in control again. Unhealthy habits had embedded their way into my life so I thought why couldn’t healthy behaviours do the same? It has been a slow process but it has worked although weight loss has not gone on a smooth line – there have been numerous ups and downs along the way.

Over the last year, I’ve recognised different behaviours I needed to tackle and improve such as stopping when I’m almost at the finishing line of achieving a goal, relapsing into striving for perfection and being committed to an “all or nothing approach” when all it does is slow down my progress, and generally lacking patience in seeing results.

But I’ve also learned that if I keep going, try implement different experts’ advice to see what works for me and be more compassionate to myself that I’ll get there.

My plan for losing my first 3st (19kg) was step by step through keeping a journal from time to time, reducing my binge-eating, eating meals more often, replacing junk food with healthier versions and taking at least 30 minutes every day to move my body in some form of exercise. Exercise and moving my body more had played a large part in continuing to do all those things, and developing a healthier mindset, relieving stress, getting outdoors and generally feeling better. It had mattered more than I’d realised. I didn’t do a large amount of exercise, but I dearly missed it when I couldn’t do it.

My latest setback was a necessary one for me to develop new habits to avoid weight gain happening in the future and be more resilient. I got an injury, a random injury that was simply part of life, but I’d decided to become focused on my frustration at not being able to progress with my goals that I’d almost reached.

My common sense took a holiday, I ate larger meals than I did when I could exercise and began to mindlessly eat higher-calorie sugary snacks. My sleep quality and quantity lessened, and a vicious cycle of sugary snacks and feeling tired began to take hold. I started to forget what it was like to feel healthy and energetic. I know from experts’ advice that nutrition counts for 70 to 80 per cent weight loss, so there was no need for me to gain weight.

Logically, I could’ve reduced the amount of food I normally ate slightly, and I would have maintained my weight. I could’ve used my spare time to have a look at my nutrition – there was plenty I needed to work on from tackling my resistance to cooking, what nutrients I’m not eating enough of and what types of foods I should be eating more of to stop my energy dropping in the evening. I didn’t like the forced change to my routine and I reacted badly. It’s a trigger I know I’ll deal much better with next time.

It’s been two weeks since I stepped on the scales and decided to cut back on the sugary snacks, reduce portion sizes of my meals and try different types of exercise. Already my sleep has improved and my belt is looser. I’ve a new appreciation for my healing foot (and I’ve stopped scowling at it). Returning to workouts was daunting after a break but not as bad as I’d imagined.

Getting back on track isn’t always easy but it’s worth it, and I’m once again enjoying finding my way to my natural weight and seeing what new limits I can push my body to reach.